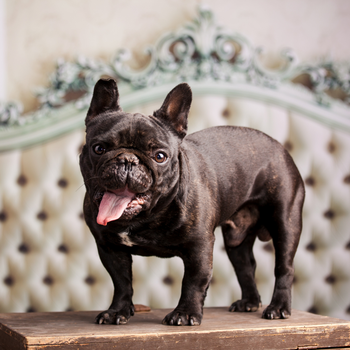 Paw Print Genetics is excited to announce that it has launched six new trait tests for coat color (Cocoa, ba allele of the B Locus, d2 allele of D Locus), coat length (Lh2, Lh4) and ‘weak’ furnishings (Fw allele).  These tests compliment the other coat color and trait tests that PPG already offers and shows our dedication to providing the largest menu of genetic tests for dogs. The following tests can be ordered as individual tests or are now incorporated into the previously offered test.  It is important to order only those tests that are applicable for your breed, so be sure to notice the breeds that can have this mutation, located in the parentheses in the name of the test.  If you are unsure about ordering, please contact us as we are always happy to help you understand the usefulness of the tests that we offer.

Prior to the discovery of the Cocoa mutation, many French Bulldogs had an untestable form of brown. Thanks to an international group of researchers, the DNA change (variant) responsible for the Cocoa coat color was identified. The variant identified is inherited in a recessive manner meaning that a dog must have two copies of the Cocoa DNA mutation to have a brown coat color.  Because a brown coat color is now known to be caused by DNA changes in two different genes, French Bulldogs with or without a Cocoa mutation, may still carry for the common brown mutations in the TYRP1 gene found in many breeds (B locus). Therefore, French Bulldog breeders may want to consider both tests in understanding their dog’s coat color. Because Paw Print Genetics (PPG) saves all leftover DNA after testing has been completed, breeders may want to first test their dogs for Cocoa, as it is the most common form of brown in Frenchies, to see if that explains their observations or confirms their suspicions based on pedigree analysis and if not, could then subsequently test for the B locus using any leftover DNA sample.

Longhair in dogs is complex. There are five known variants in the FGF5 gene that are associated with long coat lengths and Paw Print Genetics offers testing for three of these (Lh1, Lh2, Lh4). All are inherited in a recessive fashion, meaning that dogs with longhair will have two of these possible mutations. For most breeds, longhaired dogs will have two copies of the same mutation. However, for French Bulldogs, fluffy Frenchies can have two copies of either of two variants, Lh1 or Lh4.  While the Lh4 variant seems to be found in only French Bulldogs, the Afghan Hound and Eurasier, the Lh1 variant can be found in many breeds. To reliably know whether your French Bulldog carries for longhair, breeders should order the tests for Lh1 and Lh4.  Once the variant has been identified, any puppies from a known carrier would only need to be tested for a single variant (Lh1 or Lh4) to identify whether the pups are carriers or clear.

Coat Length Variants in Other Breeds

In addition to the new Lh4 variant found in French Bulldogs, PPG has offered the common Lh1 variant found in many breeds such as corgis, Labrador retrievers, and Chesapeake Bay Retrievers (and fluffy Frenchies as discussed above) since 2014.  Among these new trait tests, PPG now offers the Lh2 variant in the FGF5 gene associated with long coat lengths in Akita, Eurasier, Samoyed, Siberian Husky and related breeds.  In selecting which longhair test to order for your breed, we have provided the appropriate breeds in the parentheses next to the trait name. In addition, if you click on the name of the trait, you will be redirected to a trait summary page that describes the appropriate use of the test.  Again, you can always contact us with questions, as we want to help ensure that you are ordering appropriate tests for your breed.

New Variant in the B Locus in Australian Shepherds

Australian shepherds have two basic coat colors, black and red. Dogs that are E/E or E/e at the E locus and also B/B or B/b at the B locus will be black; whereas, dogs that are b/b at the B locus will be red.  Most Australian shepherds that are red, or carry for red (red factored), have DNA changes in the B locus that are found in many different breeds. When performing genetic testing of the B locus, the test result is determined by examining three specific locations within the B gene of a dog, known as the bc, bd, and bs loci. The overall B locus genotype for a dog is determined by the combination of genotypes (variations) present at the bc, bd, and bs loci (locations within the B gene). Recently, a different B locus mutation was identified that is specifically found in Australian shepherds. Paw Print Genetics has updated our B locus test to include the ba allele. Therefore, now when you order B locus, we will test your dog for all 4 known variants including bc, bd, bs and ba.  For Australian shepherds that are red, or have produced red pups, yet previous B locus testing didn’t reveal a b allele variant, you may want to consider retesting for B locus with this updated test that now includes the ba allele.

A diluted coat color can be caused by DNA changes in the MLPH gene (or D Locus). The first variant identified, d1, is found in many breeds and, when present in two copies, will dilute a black coat to a charcoal color (also called blue in some breeds) and will dilute a brown coat to a silver color (also called other names such as Isabella or lilac in some breeds). A second variant has been identified in the MLPH gene that also causes a dilute coat color when two copies are inherited.  This new mutation, d2, is known to occur in breeds such as the Chow Chow, Sloughi, and Thai Ridgeback. Dogs that have a dilute coat color but have tested as clear or carriers for the common D Locus variant d1, can now be tested to see if they also have the d2 variant, as some dogs are compound heterozygotes showing one copy of d1 and one copy of d2.  Now, when you order the D Locus (dilute), your dog will receive testing of both known variants, d1 and d2.

We are excited to offer these six new tests. To help you complete the testing that you need for your dogs, be sure to use one of our current discounts. As always, all testing comes with Paw Print Genetics’ commitment to excellent service and the highest accuracy and testing standards in the industry. Please contact us if you have any questions about these tests or any of our genetic tests for your dog.  You can reach us via email at askus@pawprintgenetics.com or by phone, toll free (US & Canada) at 855-202-4889 or direct at 509-483-5950. It is our continuing goal to support your efforts in producing the healthiest puppies possible and provide value to your breeding program.

Tissue Management Prior to Genetic Testing