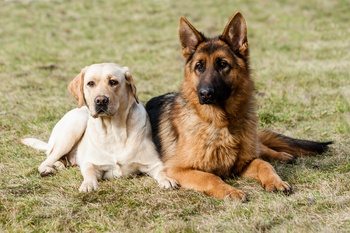 Paw Print Genetics has launched 44 new inherited disease tests and two new trait tests for various breeds.  With nearly 300 different tests for more than 350 breeds of dog, Paw Print Genetics (PPG) continues to be the leader in providing genetic tests for dogs.  Here are some of the new tests being offered.  You can find these new tests for your breed under the category “Additional Disease Tests” on your breed-specific page on our website.

PPG has launched Saddle Tan (As locus) and Intensity (I locus) as part of their large number of coat colors and traits offered for various breeds.  Both of these genetic loci modify a dog’s coat color based on their genotypes at other coat color genes. For Saddle Tan, the variation in the RALY gene will modify a dog’s coat presentation only if the dog also has tan points (kyky at the K locus and at/at or at/a at the A locus).  Sometimes called creeping tan, a dog with one or two copies of the As variant and tan points may show a ‘shrinking’ dark saddle across the back, revealing more of the tan points. As Saddle Tan is dominant, testing for this variant will reveal if a dog has one or two copies of this variant.

The Intensity locus can modify the yellow or red phaeomelanin pigment to a less intense, cream or white. Dogs that are e/e at the E locus, are sable, or have tan points due to the A locus, may show a lighter color only where the phaeomelanin pigment is expressed if they carry two copies of the Intensity variant (i/i). Testing a dog for the Intensity locus may help breeders identify carriers (I/i) from non carriers (I/I) or identify the genetic basis for dogs that have a lighter coat color as compared to littermates or others of the same breed.

PPG has launched two additional disease tests for Labrador retrievers, Cone Degeneration and Stargardt Disease.  Both diseases are recessive, meaning that dogs must have two copies of the mutation to be affected with either of these diseases.  Cone Degeneration is caused by a mutation in the CNGA3 gene and affects mainly the cone photoreceptors of the eye, causing day bindness (blindness in bright light) whereas, Stargardt disease is caused by a mutation in the ABCA4 gene resulting in degeneration of both the rods and cones of the retina and causes a gradual but significant loss of vision. Testing for these mutations will allow breeders to avoid producing affected puppies. The addition of these two disease tests brings the total number of genetic tests offered for Labradors to 21.

In addition to the two new eye diseases for Labradors, PPG launched Cone Degeneration for German Shepherd Dogs, Primary Open Angle Glaucoma in the Basset Fauve de Bretagne and the Norwegian Elkhound, Progressive Retinal Atrophy, PRA3 for the Tibetan Terrier and Tibetan Spaniel, and Retinal Dysplasia/Oculoskeletal Dysplasia 2 in the Samoyed.  And speaking of skeletal dysplasias, other genetic tests launched that affect the skeleton include Van Den Ende-Gupta Syndrome (skeletal dysplasia syndrome) in the Wire Fox Terrier, Chondrodysplasia in the Karelian Bear Dog and Norwegian Elkhound, and Spondylocostal Dysostosis in the Miniature Schnauzer.

Dermatomyositis in Collies and Shelties

Dermatomyositis (DMS) is a complex disorder affecting the skin of collies, both rough and smooth, and the Shetland sheepdog.  The genetic cause of DMS is complex, involving at least three regions of the genome including PAN2 (locus A), MAP3K7CL (locus B) and DLA-DRB1 (locus C). Specific combinations of variations at these genes will increase a dog’s risk of DMS. Testing a dog will provide information about the risk of developing DMS, with three main risk groups reported, low risk, moderate risk or high risk genotypes. Each report on a dog tested for DMS will provide the risk group to help guide the breeders through this complex disease. Because PPG strictly follows the published Standards and Guidelines, dogs tested for DMS are tested twice at each of the three genetic regions, for a total of six tests.

PPG now offers four tests for the Soft Coated Wheaten Terrier, including degenerative myelopathy, chondrodystrophy with IVDD risk, and now Adult Paroxysmal Dyskinesia (APD) and Protein Losing Nephropathy (PLN).  APD is a progressive movement disorder characterized by uncontrolled muscle contractions that results in repetitive, involuntary movements. PLN is a disorder that affects the kidneys that causes a dog to lose protein that it would otherwise be stored and used by the body. Signs include vomiting diarrhea and weight loss. For either disorder, testing can be used to avoid producing affected puppies.

Several, new disease tests associated with conditions that affect the nervous system were launched. These include Cerebellar Cortical Degeneration in the Vizsla, Cerebellar Degeneration in the Gordon Setter and Old English Sheepdog, Hypomyelination in the Weimaraner, Juvenile Laryngeal Paralysis and Polyneuropathy in the Rottweiler and Black Russian Terrier, Neuronal Ceroid Lipofuscinosis (NCL) in the Tibetan Terrier, NCL1 in the Cane Corso, NCL7 in the Chinese Crested Dog and Chihuahua, Polyneuropathy in the Leonberger, the Saint Bernard, and the Alaskan Husky, Lagotto Storage Disease in the Lagotto Romangnolo, Congenital Myasthenic syndrome in Russell Terrier, Parson Russell Terrier and Jack Russell Terrier, and L-2-Hydroxyglutaric Aciduria in Yorkshire Terriers and Biewer.

In addition to Cone Degeneration, as discussed above in eye diseases, PPG launched two additional new diseases for German Shepherds including Hemophilia A (two different mutation for this bleeding disorder exists for GSD) and Pituitary Dwarfism. This brings the total number of disease tests offered for the German shepherd dog to 12.

In addition to Hemophilia A in German Shepherd Dogs, PPG launched Factor XI Deficiency in the Kerry Blue Terrier, Hemophilia A in the Boxer, and Hemophilia B in the Lhasa Apso. It is important to identify a possible bleeding disorder in a dog before spaying or neutering. In addition, knowing that your dog has a bleeding tendency could be lifesaving in case of trauma or needing other surgeries.

With 46 new tests launched, it is difficult to discuss each of them in this short blog. You can go to your breed’s page to see the new tests under Additional Disease Tests.  To order, simply click the box next to the name of the disease and add it to your dog(s).  As examples, in Beagles you will find Catalase Deficiency and Intestinal Cobalamin Malabsorption, Cleft Palate with syndactyly for Nova Scotia Duck Tolling Retriever, Dental Hypomineralization in Border Collies, Dilated Cardiomyopathy in Giant Schnauzers, GM2 Gangliosidosis in Japanese Chin, Hereditary Footpad Hyperkeratosis in Irish Terrier and Kromfohrländer, Ichthyosis in the Great Dane, and Myotubular Myopathy in the Rottweiler, among many other new tests launched.

If you have any questions at all, please contact us at 509-483-5950 (toll free in the US and Canada 855-202-4889) or by emailing us at AskUs@pawprintgenetics.com.  We are happy to discuss any of these new tests with you to see if they would be beneficial to your breeding program. As always, our testing comes with Paw Print Genetics’ commitment to excellent service and the highest accuracy and testing standards in the industry. It is our continuing goal to support your efforts in producing the healthiest puppies possible and provide value to your breeding program.

A Tribute to Trixie the Wiener Dog

The Genetics of Hairlessness