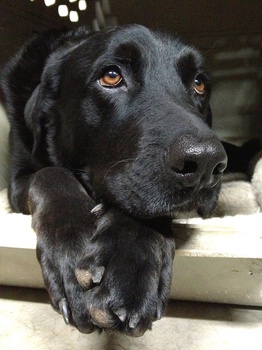 Inherited in a recessive manner, Labradors with two copies of the associated CHST6 gene mutation typically present in middle age with MCD-associated vision loss. Affected dogs display decreased activity of an enzyme known as corneal glucosamine N-acetyl-6-sulfotransferase (C-GlcNAc6ST), which results in decreased sulfation of the corneal glycosaminoglycan, keratin sulfate (KS). Decreased sulfation of KS reduces its solubility, thus preventing its full metabolism and allowing for deposition into the extracellular space of the corneal stroma and Desmet’s membrane, and intracellularly in keratinocytes and corneal epithelial cells. Since strict organization of the corneal stroma is necessary to maintain transparency of the cornea, abnormal KS deposition causes progressive corneal opacity and subsequent loss of visual acuity.

Labradors affected with MCD commonly present between 4 and 6 years of age with a history of cloudy eyes and progressive vision loss due to multiple off white to yellow-brown deposits in the corneal stroma2. As the disease progresses, an increase in the number and size of the opaque KS corneal lesions results in progressive visual disruption. In later stages of MCD, corneal vascularization is common and visual acuity is severely affected. Treatments consist mostly of surgical interventions including keratectomy or keratoplasty. In addition, the presence of late stage corneal vascularization indicates that dogs may benefit from topical anti-inflammatories to reduce disease-associated inflammation of the eye1. However, KS deposits are not eliminated with anti-inflammatory therapy. Thus, significantly limiting any vision-improving effects of these drug treatments. Because the best treatments require surgical intervention, eliminating the possibility of disease through genetic testing of prospective breeding pairs and avoiding carrier to carrier breeding, is the best prevention for MCD.

Congenital myasthenic syndrome, as described in the Labrador retriever, is a recessively inherited form of the more common, acquired immune-mediated disease, myasthenia gravis3. Unlike dogs which develop acquired myasthenia, dogs with CMS do not display autoimmunity to acetylcholine receptors resulting in the characteristic disruptions in neurotransmission. Instead, Labradors with CMS have inherited a recessive genetic mutation of the canine COLQ gene from each parent, thus resulting in malformation of the enzyme acetylcholinesterase (AChE)3. Malformed AChE is rendered less capable of hydrolyzing the neurotransmitter acetylcholine, preventing the normal termination of synaptic transmission at musculoskeletal junctions. Overstimulation of post-synaptic acetylcholine receptors results in desensitization, significantly decreased neurotransmission, and the characteristic clinical signs of CMS.

Labrador puppies affected with CMS commonly present within the first month of life with severe exercise-induced weakness in all four limbs, leading to collapse. Affected dogs will have decreased reflexes in all four limbs and a short-strided gait which becomes progressively more severe as exercise continues. Descriptions of effective treatments for COLQ-associated CMS are sparse. Since the clinical signs of this form of CMS are due to a relative excess of acetylcholine at the neuromuscular junction, treatments with anticholinesterase drugs (as used to increase synaptic acetylcholine availability in acquired myasthenia gravis cases) are ineffective in CMS-affected dogs. In one study, vast improvements were reported in the clinical signs of golden retrievers with a novel form of COLQ-associated CMS after administration of the beta-adrenergic drug, albuterol4. However, these improvements were only short-lived, and the affected puppies eventually progressed in severity, requiring euthanasia.

Due to the dearth of treatment options, prevention of CMS through genetic testing of breeding pairs and informed selective breeding is currently the most effective way to combat this disease. However, genetic testing of Labradors or Labrador hybrids (eg labradoodles) showing characteristic signs of CMS can be a significant help in diagnosis and differentiation from a common, similarly presenting disease of Labradors, exercise-induced collapse.

The neuronal ceroid lipofuscinoses (NCLs) are a group of inherited, progressive lysosomal storage diseases linked to genetic mutations in several genes resulting in a characteristic accumulation of the storage material, lipofusin in neurons of the brain and retina5. Once accumulation of lipofuscin reaches levels necessary to disrupt neurotransmission, affected dogs begin to experience progressive neurological disease with few effective treatment options. Neuronal ceroid lipofuscinosis 5, as described in the golden retriever, is a recessive type of NCL associated with a frameshift mutation of the CLN5 gene5.

Golden retrievers affected with NCL5 present around 13 months of age with loss of coordination, balance issues, and difficulty climbing stairs which may be more pronounced when excited5. The disease progresses to include severe incoordination, anxiety, agitation, persistent circling or pacing, loss of response to learned commands or behaviors, ‘fly-biting’, blindness, aggression, and seizures5. Sadly, affected dogs typically die or are humanely euthanized by 3 years of age.

Paw Print Genetics offers the largest menu of individual canine genetic disease tests in the industry to assist the veterinarian with clinical diagnosis. In addition, PPG veterinarians and geneticists are available Monday through Friday for consultation and to assist in choosing the right test to address your particular patient. If you have questions about a case in your clinic or just have general questions about canine genetic testing, please feel free to contact the knowledgeable PPG team at 509-483-5950 or AskUs@pawprintgenetics.com.

Does Your Dog Suffer from Noise Anxiety?