Tweet
by Matt Tschirgi on April 7, 2014 in Trixie's Paw Prints 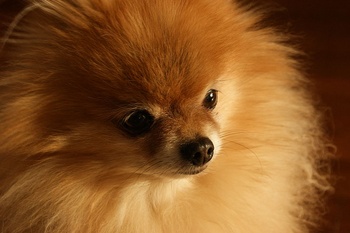 In my last blog, I defined words that described when symptoms may present themselves in a dog affected with a genetic condition.  Today’s topic of discussion is how those symptoms show up (or not show up).  These terms are easily confused with each other.  I’ve even heard some geneticists can get these definitions mixed up.  Let me introduce two terms: Incomplete penetrance and variable expressivity.

Incomplete penetrance is a term that describes symptoms, which may or may not be present in a dog with an at-risk or affected genotype.  The dog has the mutated gene in the right number of copies to cause the disease, but the dog may not show physical symptoms of the disease.  As you can imagine, this can cause some confusion when examining the pedigrees of your dogs and this is when genetic testing becomes an important tool.  If genetic testing is positive, we know the dog has the mutation that causes the disease. Regardless if there are symptoms, this dog can pass this mutation on to its offspring.  Knowing this information may impact breeding practices, as discussed in previous blogs.  The concept of incomplete penetrance is an “all or nothing” situation.  Dogs with the mutation in the right number of copies to produce the disease (at-risk), either has the symptoms or not.  Incomplete penetrance does NOT describe the severity (mild, moderate, and severe) of the symptoms.  There may be several pups in a litter that all have the mutation in the right number of copies to produce the disease, but only some have symptoms.  In this situation, some may appear “normal” or unaffected when in fact they have the mutated gene and others have the same abnormal genotype and show the disease.  It is possible for a dog to inherit the gene, have no symptoms, but pass that mutated gene on to the next generation, where symptoms show up.  This may be why people think a particular gene will “skip a generation”, although this term is not really scientifically correct.

An example of a canine genetic disorder with incomplete penetrance is gallbladder mucoceles.  This is a rare dominant condition found in several breeds of dogs including Cairn terrier, Cocker spaniel, Pomeranian and Shetland sheepdog. Dogs with this disorder may present with vomiting, loss of appetite and abdominal pain. A mucocele in the gallbladder results in an abnormally distended gallbladder that contains excessive mucus. It can result in inflammation and possible rupture of the gallbladder. If the gallbladder is not removed before rupture, the dog may become very ill and die. Because gallbladder mucoceles have symptoms that are common to other diseases, it can be difficult to diagnosis without ultrasonography or surgery.  A positive genetic test does not guarantee the affected dog will show symptoms, but there is a high risk that it will.  Again, this is because of incomplete penetrance. Identifying a dog at-risk for this condition will allow early intervention in symptomatic dogs and the potential for delaying the onset of symptoms through diet.  Breeders may chose to not breed a dog at-risk for this condition to eliminate this mutation from their breeding lines.

Unlike incomplete penetrance, variable expressivity describes the severity of the symptoms present.  The question isn’t if the affected dog has symptoms, it’s how many symptoms there are, and their respective intensities.  An analogy that is sometimes used to explain variable expressivity is a dimmer light switch.  You can turn on a light using a dimmer switch.  If you only set the dimmer to the lowest setting, you only get a small amount of light.  As you increase the setting on the dimmer switch, you increase the amount of light until finally it’s at the highest setting.  Think of the genetic condition as the dimmer switch, and the amount of light as the severity of symptoms.  Genetic conditions with variable expressivity may have mild, medium or severe symptoms, or the number of symptoms may vary.  This variability can even be seen among siblings who all have the exact same genetic mutation.

An example of a disease that shows variable expressivity is multifocal retinopathy 1.  This inherited disorder affects the retina and is known to occur in numerous breeds, such as American Bulldog, Australian Shepherd, and Mastiff, among others. The disease causes changes to the retina that can be detected on an ophthalmology exam. Affected dogs present with numerous circular patches of the retina that appear elevated due to accumulation of material on the retina. These blister-like lesions can appear gray, tan, or pink in color and can vary in size and location. Retinal changes can appear as early as 4 months of age and progression of retinal changes is variable and can be slow. Some affected dogs may have lesions that appear to heal and disappear but may reappear again later. Retinal changes in this disease may affect vision. Just because a dog has the condition, does not mean it will show all of the above symptoms.  It may show a few or many.  Timing of when the symptoms show up can be variable, even among pups in the same litter.

The concepts of incomplete penetrance and variable expressivity are important to the veterinarian when diagnosing an inherited canine genetic condition.  If the breeder/owner understands these concepts as well, it will allow the veterinarian and the breeder/owner to work together to best care for an affected dog or litter.  A little genetic knowledge goes a long way when it comes to understanding the genetic expression of inherited canine diseases.

Breed of the Week: Vizsla

The Complexity of the Canine Genome