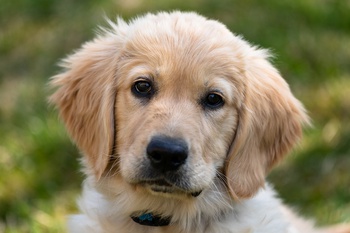 Dogs affected with NCL5 are born with a deficiency of a specific enzyme necessary for normal cellular metabolism. This deficiency results in an abnormal accumulation of waste compounds in the cells of the nervous system, resulting in a range of progressive neurological symptoms. Affected golden retrievers will typically present around 13 months of age with a loss of coordination, balance issues, and difficulty climbing stairs which progresses over time to severe incoordination, anxiety, agitation, persistent circling or pacing, loss of response to learned commands or behaviors, snapping at air (called “fly biting”), blindness, aggression and seizures. Unfortunately, dogs with NCL5 commonly die or are humanely euthanized by 3 years of age due to concerns over quality of life.

How do I find out if my golden is a carrier of NCL5?

One can reliably determine whether a golden retriever is a genetic carrier for neuronal ceroid lipofuscinosis 5 (golden retriever type) through genetic testing for a specific mutation in the CLN5 gene. Paw Print Genetics understands that accurate genetic testing results are crucial to the overall health and reputation of your kennel. For this reason, when you order NCL5 from Paw Print Genetics, we will test your DNA sample twice using two independent testing methods and will only report results if they match on both methods. This allows us to provide the highest accuracy rate in the industry at over 99.9%.

My dog is a carrier of NCL5, now what?

Neuronal ceroid lipofuscinosis 5 is inherited in an autosomal recessive manner in dogs, meaning that they must receive two copies of the mutated gene (one from each parent) to develop the disease. Dogs which have only inherited a single copy of the mutation are considered carriers of NCL5 and will not have any features of the disease caused by this specific mutation. However, carriers of NCL5 can produce affected puppies if bred to another carrier of the same CLN5 mutation. Therefore, it is important to test dams and sires for this mutation prior to breeding and to only breed NCL5 carriers to clear dogs – those that do not have any copies of this mutation.

Neuronal ceroid lipofuscinosis 5 (golden retriever type) is now available through Paw Print Genetics at our special introductory pricing of only $40. This test must be ordered over the phone and is not yet available on our website. Because of this low, introductory price, orders for NCL5 do not qualify for any additional discounts. During this promotion, should you decide to cancel your order, refunds are not possible, but an in-house credit may be issued for a future order. Test results are available 14 days or less from sample receipt by our laboratory. If you have any questions about this testing, or if you would like to place an order, please contact us at 1-509-483-5950  or toll-free from the US or Canada, 1-855-202-4889 (Monday through Friday; 8 am to 5 pm Pacific time)

The Veterinarian's Corner: Incorrectly Recorded Canine Parentage and the Effect on Genetic Health