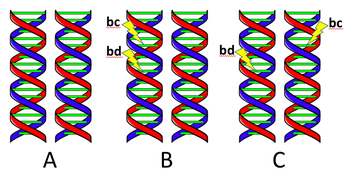 Coat color genetics can be very confusing. There are many different genes that can contribute to the overall coat color in a dog and for each gene, there can be different mutations that can contribute to color variations.  The B locus (or gene) is responsible for many of the brown coat colors seen in dogs (also referred to as chocolate or red, depending on the breed).  When performing genetic testing of the B locus, the test result is determined by examining three specific locations within the B gene of a dog, known as the bc, bd, and bs. The overall B locus genotype for a dog is determined by the combination of genotypes (variations) present at the bc, bd, and bs loci (locations within the B gene).

Figure A represents two copies of the B gene with no variants present at any of the three loci. Dogs with no variants on either copy of the B locus have a B/B genotype. Dogs that are B/B at the B locus will have a black coat, unless they are also e/e at the E locus, and then they will be yellow.

Figure B shows two variants, but both variations (shown in this example as bc and bd) are found on the same copy of the gene (meaning that they were inherited from only one of the parents). A dog carrying two of the variants, but on the same copy of the gene, is a carrier for brown (brown factored) and will not exhibit a brown coat color.  Dogs with variants on a single copy of the B locus (inherited from one parent) have a B/b genotype.  Dogs that have a B/b genotype at the B locus will have a black coat, unless they are also e/e at the E locus, and then they will be yellow.

Figure C also shows two variants, but in this case, each copy of the gene has one of the variants (meaning that one parent contributed the bc variant while the other parent contributed the bd variant).  This dog would likely have a brown coat color (depending on the specific genotypes at other genes such as E locus) and would have a brown nose and brown footpads. Dogs that have a variant present on each of their B genes have the genotype b/b.

As with all color testing, a dog’s ultimate coat color is dependent on many genes including the E, K, and A loci. Paw Print Genetics offers a comprehensive menu for color testing and has genetic counseling available prior to ordering (pre-test counseling) or after you have received your results (post-test counseling). We are committed to helping you understand the genetics of your dogs and how genetic testing can be used to improve your breeding program. You can contact us at AskUs@pawprintgenetics.com or call us toll free (US and Canada only please) 1-855-202-4889 or direct at 509-483-5950.  We look forward to helping you with your coat color testing.

Nature Versus Nurture- The Case of the All-Male Litter

Help! I Bred Two Cream Dogs and Got an All Black Litter!