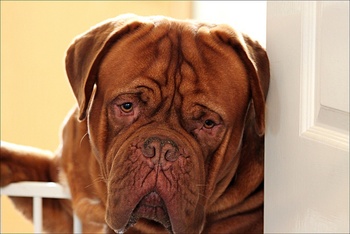 If you look at the largest dogs around, they all have some things in common. They were usually bred for work – protecting their master and their property, guarding and working livestock, hunting big game and dangerous game and, often, to fight either in battle or for entertainment.

They also share many of the same genetic diseases, which can be a clue to their often intertwined histories and evolutions. Big dogs also have special developmental needs, from feeding to exercising.

If you’re in the market for one of the largest dogs known to man, make sure you select it from genetically tested stock to help ensure that your pup enjoy as healthy of a life as possible.

Here’s a look at the largest dogs alive, their histories and which genetic mutations plague them.

Made famous in America alongside Tom Hanks in “Turner and Hooch,” the dogue de Bordeaux (above) is a mastiff-type dog with a massive head and stocky body that has been used to guard, hunt and fight both wild animals and those it was forced to square off against in a pit. While they possess a guarding instinct, they aren’t vicious and make great family companions. They can stand up to 27 inches tall and weigh at least 99 pounds.
Known genetic mutations: Multifocal retinopathy 1

Among the largest of dogs, the mastiff can stand as tall as the Irish wolfhound but will weigh 100 pounds more. In fact, the before the Guinness Book of World Records stopped validating the heaviest pets, a mastiff named Zorba claimed the crown and topped the scales at 343 pounds!
Known genetic mutation: Degenerative myelopathy, multifocal retinopathy 1, progressive retinal atrophy (Group A)

Ideally standing between 32 and 34 inches at the shoulder and weighing a minimum of 120 pounds, the Irish wolfhound was originally used to hunt, not surprisingly, wolves and stag. They were also used to guard castles and family members, fight in battle and as family companions.
Known genetic mutations: Degenerative myelopathy, startle disease

Dating to the 16th Century, deerhounds were used by nobility for hunting deer and stag. Long-legged and athletic, the deerhounds were reserved for those nobles – nobody less than the rank of Earl could own one! They stand approximately 32 inches tall and weigh up to 110 pounds.
Known genetic mutations: Coagulation factor VII deficiency, a blood-clotting disorder

A mainstay of shepherds from Asia to Europe, the great Pyrenees has a thick white coat that makes it impervious to winter cold, which made it possible for the breed to protect flocks of sheep from wolves on high-altitude mountain pastures. They stand 27- to 32-inches tall and weigh 100 or more pounds.
Known genetic mutations: Degenerative myelopathy, Glanzmann's thrombasthenia (Group A), Multifocal retinopathy 1

The kuvasz was used to guard livestock throughout Europe. Standing 26- to 30-inches tall at the shoulder and weighing 70 to 115 pounds, and possessing an extremely thick white coat, kuvasz lived with flocks of sheep and protected them from wolves and other dangers.
Known genetic mutations: Degenerative myelopathy; Progressive retinal atrophy, Progressive rod-cone degeneration

Dogs resembling the great Dane can be traced to ancient Egypt and China, but modern iterations of the enormous breed are believed to contain crosses of Irish wolfhound and mastiff. Developed to hunt wild boar, great Danes eventually became guard dogs and companion animals. It is preferred that they stand at least 32 inches at the shoulder; weight should be proportionate to size, typically 120-200 pounds!
Known genetic mutations: Dilute (D-locus) coat color, harlequin coat color, inherited myopathy of great Danes

Standing up to 28 inches at the shoulder and weighing as much as 150 pounds, the thick, long-haired Newfie is a true workhorse. Originally used to haul nets between boats for fishermen in the Atlantic off of Newfoundland, Canada, this big dog is now pulls a range of duties – from family companion to water-rescue dog!
Known genetic mutations: Cystinuria, dilute (D-locus) coat color, thrombopathia (Group C)

A relatively new breed, the black Russian terrier has an interesting history, best summed up by the AKC: “The Black Russian Terrier's history is one of mystery and intrigue. Following WWII, the Soviets sought to reintroduce purebred dogs into the mainstream. Red Star Kennel, the state operated organization chartered to provide working dogs for the armed services, actively developed a new breed, the Black Russian Terrier. Though the early Black Russian Terrier did not look the same as today's, Red Star was successful early on in producing a big, strong, unpretentious dog that didn't require extensive coat care, and that demonstrated trainability and aggression to serve the Soviet Union's needs.” They can stand as tall as 30 inches at the shoulder and weigh as much as 130 pounds.
Known genetic mutations: Hyperuricosuria

Originating on Spain’s Canary Islands, this large breed was originally used to work livestock. They are strong dogs, both physically and psychologically, which requires a knowledgeable owner and early socialization, as well as obedience and behavior training. Athletic, they can stand 26 inches tall and weigh a minimum of 103 pounds – usually more and proportionate to their height.
Known genetic mutations: Multifocal retinopathy 1

Breed of the Week: Boxer