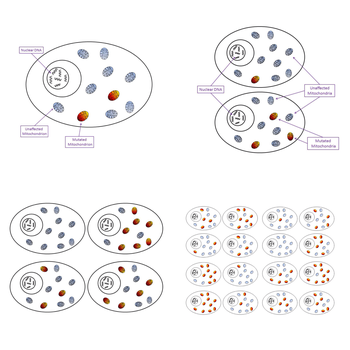 My last two articles on dominant and recessive inheritance and X-linked inheritance have built upon each other and discussed different types of inheritance: dominant, recessive and X-linked.  These three modes of genetic transmission are fairly straightforward compared with the topic of today’s post, which is mitochondrial inheritance.  Maybe you’ve never heard of the word “mitochondria” before.  Or perhaps just reading the word brings you back to high school cell biology.  While this may be a rare form of inheritance, diagnosing a dog with a mitochondrial disorder may impact how breeders choose to breed their animals.

Before we discuss the mitochondrial inheritance, let’s talk about mitochondria. Just like our bodies need organs to function (kidneys, heart, liver, etc.), cells have organelles too.  One of the organelles is called a mitochondrion or mitochondria (plural).  Mitochondria are the energy powerhouses of the cell.  They create energy through a series of biochemical reactions.  The number of mitochondria can change depending on the type of cell (muscle, nerve, skin, etc.).

The neat thing about mitochondria is that they have their own set of DNA, called mtDNA, separate from the DNA found in the nucleus; mtDNA is thought to be <1% of someone’s entire genetic make-up.  Another unique fact about mtDNA is how it’s passed through the generations.  The sperm does not pass on any mtDNA to the offspring.  Only eggs have mtDNA.   Dogs (and humans) inherit mtDNA only from their mothers.  This means that an affected male cannot pass on a mitochondrial disorder to the next generation.  However, the female has the ability to pass on a mitochondrial disorder, maybe even to 100% of its offspring.

There can be thousands of copies of mtDNA in a single cell.  The mtDNA reproduces itself independently of the nuclear genes.  When a cell duplicates itself, there can be varying numbers of mitochondria in the resulting two daughter cells.  mtDNA gets sorted between the two cells, and ratios of mitochondria can change with each generation.  Now, imagine if there’s a mutation in some of the mtDNA.  Let’s say 20% of the mitochondria have the genetic mutation (with the potential to cause disease), and 80% of mitochondria do not and the cell starts to divide.  The resulting two cells may have a different ratio of mutated mtDNA to non-mutated mtDNA.  The ratio of mutated mtDNA to unaffected mtDNA can change with each generation of cells.  With each cell doubling itself many times over, you can imagine there are thousands of possibilities for these genetic ratios.  This is why mitochondrial inheritance is so tricky.

An example of a mitochondrial disorder in dogs is sensory ataxic neuropathy in Golden Retrievers.  Affected dogs begin to show signs of ataxia, the loss of muscle coordination, in puppyhood and symptoms progress over time.  Affected dogs also have reduced or absent reflexes.  Muscle mass appears normal and the condition does not appear to be painful.  Neurologic studies show that affected dogs have reduced function of their sensory nerves. Because symptoms do progress over time, dogs are often euthanized before three years of age.  Given the severity of this disease, reliable genetic testing is important for determining breeding practices. Breeding of affected female animals or known female carriers is not recommended.

Well, there you have it: dominant, recessive, X-linked and mitochondrial inheritance.  It is important to be able to distinguish what condition follows what pattern of inheritance.  Recognizing these patterns may also assist in avoiding these disorders, if genetic testing is not available.  As more breeders use genetic testing, they may be able to reduce (or even eventually eliminate) these diseases from breeding lines.

Breed of the Week: Pomeranian