Dermatomyositis (DMS) is an immune mediated, inflammatory disease affecting the skin and muscles of Collies and Shetland Sheepdogs. Skin lesions can present before 6 months of age and typically precede muscle lesions. However, some dogs develop skin lesions later into adulthood. These wounds begin as small swellings that become pustules, ulcers, and crusty hairless regions. Affected areas include the muzzle, footpads, around the eyes and lips, ears, and any bony prominences like the points of the elbow or the tops of the paws. Unless secondarily infected, lesions are not painful or itchy. Typically, the disease peaks around 1 year of age, and in some cases the dog may improve as it continues to age. Some dogs with DMS may develop inflammation of the muscles (myositis) without showing skin lesions. Over time, muscles may show signs of Atrophy, especially the muscles needed for chewing. Affected dogs may have difficulty eating and drinking from a bowl and may walk with a stiff-legged gait. More commonly, skin lesions occur months before myositis develops. When present, myositis is consistent with overall disease severity, with mildly affected dogs presenting no signs of muscle issues. Dogs with severe myositis can exhibit stunted growth, widespread muscle atrophy, and aspiration pneumonia from swallowing difficulties. Treatment is focused on management of the presenting skin lesions along with regulating the immune system to reduce the presentation. Although most dogs will respond to treatment, relapses are common. Severe skin lesions may result in scarring. Long term complications are possible for dogs with chronic DMS lesions.

Breed-Specific Information for the Shetland Sheepdog

Research into the genetic cause of dermatomyositis (DMS) in Collies and Shetland Sheepdogs identified DNA variations/mutations in three regions of the genome associated with DMS risk. The three regions (loci) of the genome are: PAN2 (Locus A), MAP3K7CL (Locus B), and DLA-DRB1 (Locus C). Specific combinations of the three loci are associated with an increased risk of developing DMS (see table below). For Locus A and Locus B, the normal “wild type” versions (alleles) of the gene are represented by lower case letters, “a” and “b”, whereas the mutant “risk” alleles are represented by capital letters, “A” and “B”. Locus C is the Dog Leukocyte Antigen (DLA) region of the canine genome and is part of the major histocompatibility complex (MHC) which plays a critical role in the immune response. Locus C is a complex and highly variable region with standardized nomenclature for each Allele. Each allele is defined by having a unique DNA sequence across the >em>DLA-DRB1 region. The “002:01” allele is associated with DMS risk and is represented by a capital letter, “C”, whereas all other alleles are represented by a lower case “c”. Reliable genetic testing is important for determining breeding practices. In general, it is recommended to avoid breeding dogs that will produce puppies with high-risk genotypes. For example, one breeding strategy, focused on the Locus A and Locus B genotypes, would be to breed any “aa” genotype dog to any “bb” genotype dog because they will not produce puppies with moderate or high-risk genotypes. Likewise, breeding an “aabb” dog will not produce moderate or high-risk puppies. 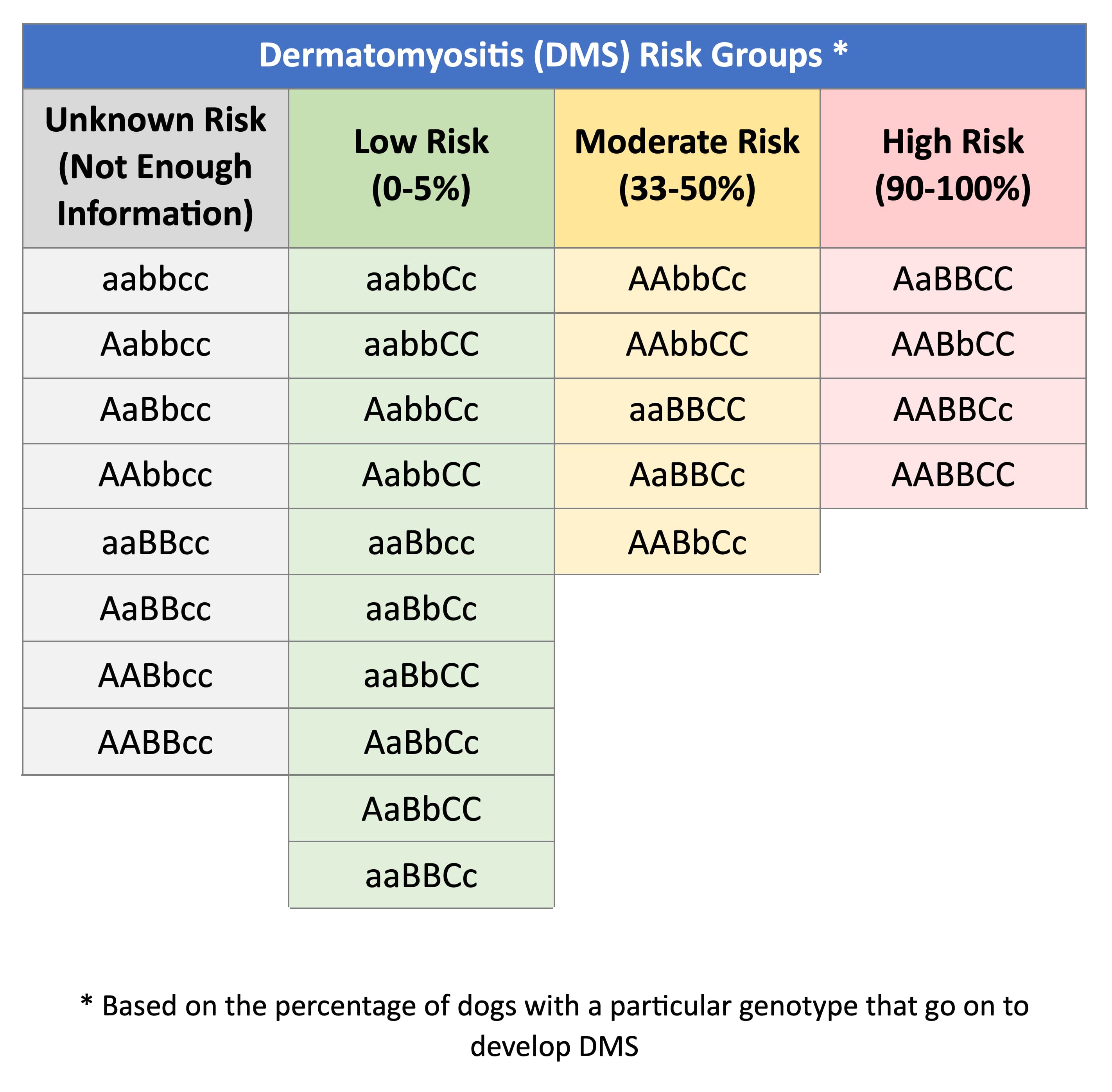