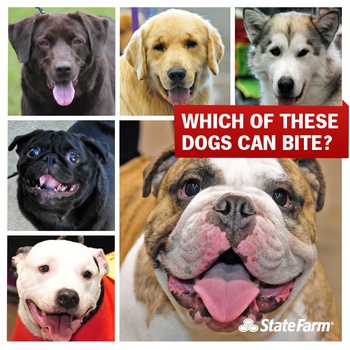 The top-10 states for dog bites include:

Two things jump out for certain: you’re twice as likely to get bit by a dog in California as in any other state; if you’re an owner whose dog seriously bites someone, you’re going to pay a hefty sum.

While any dog can bite – the old saying ‘if it has teeth, it can bite’ comes to mind – there are steps you can take to help keep your dog from becoming a bite-first-ask-questions-later dog.

Socialization and exposure are two things, perhaps the biggest, that go a long way to making a dog feel safe and secure.

Socialization includes introducing your dog to all sorts of people and pets. Different races, different age groups, loud people, quiet people, big, small, bearded or clean shaven, and wearing different types of clothes and carrying objects like umbrellas or briefcases. Meeting these people and having a positive experience with them when young will go a long way later in life. It goes for other animals, too –introduce them to other dogs, cats, birds, reptiles, etc. in a controlled manner. The younger you start (provided immune functions are healthy) and the more frequent, the better.

Exposing your dog to different environments when young can help reduce situational fear that could result in a bite. Busy streets and parking lots, households will lots of people, loud playing children, vacuums, washing machines, lawn mowers – any place you can think of, really – that your dog could come into contact with throughout their life should be on the list of places to visit when they’re a puppy.

Also: various surfaces – grass, dirt, carpet, linoleum, concrete, hardwood floors, metal floors, and steps made of these surfaces, grates, bridges, tunnels and more can all cause apprehension in a dog. Early exposure and a positive experience can reduce that anxiety.

Solid obedience training not only results in a good canine citizen, it helps create a balanced and psychologically assured dog. A dog that has a job to do (even if that’s just living up to consistent standards of sit, stay, heel, and here), knows its place and what’s expected of it, as well as that people lead, usually results in a dog that looks to people to help first, reserving a bite for something it perceives as an immediate and unavoidable threat.

Children and dogs. They make for great learning, bonding and life-teaching lessons, not to mention fantastic photos, but there are limits and guidelines to follow to keep both the child and the dog safe. Even if your dog has been socialized and exposed to children, they should never be left alone with them – the younger the child, the important this point is; a bite, even a nip, to tender, young flesh can leave life-long scars (and costly reconstructive surgery; which is why insurance claims for bites are so high).

You need to be cognizant of how your child and dog interact, and proactive in avoiding situations that could cause reactions between either.

The herky-jerky movements and running of toddlers can elicit reactions from dogs; not necessarily bites, but herding behaviors (which include nipping at heels), grabbing of snacks waved at eye level and many other potential situations. Sometimes it’s best to just separate the two during times of hyperactive play and feeding.

Playing, screaming children, especially if they close in on a dog’s personal space (hugging, laying on top of, pulling on body parts), can stress a dog – watch your dog’s reactions and body language (ears back, turning of the head/looking away or moving from the immediate vicinity of the child are all signals the dog wants out of the situation); respect the dog’s wishes and give him room by either explaining to your child why they need to leave the dog alone (if they’re old enough to comprehend) or, again, put the dog outside or in another room.

An ounce of prevention is worth a pound of cure – and judging by insurance payouts, tens of thousands of dollars.

Inherited Diseases of the Miniature Schnauzer