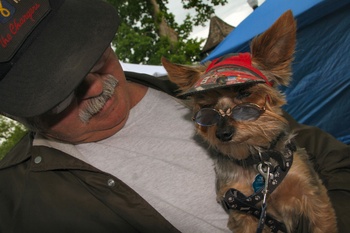 Another study compared personality type to the likelihood of owning certain breeds – traits displayed by the owners were generally found in the dog and increased the likelihood that the two would make a successful pair.

According to the results, Labrador and golden retrievers tend to be owned by friendly people, while working dogs such as the Great Dane tend to owned by agreeable, intelligent people. Corgis are owned by extroverts and toy dogs are owned by open, creative and intelligent people. It seems several different breeds or types of breeds of dogs are associated with different types of personalities or combinations of personalities.

Of course, research such as this is subjective by nature, and there are all sorts of variables at play – subjective reporting by humans, the ability of dogs to adapt to the owner’s life and personality (and the influence the two have on each other), lifestyle situations and uses (active outdoor lifestyle vs. quiet office setting, hunting dog vs. companion-only animal, apartment vs. country living, etc.).

Personally, these studies ring true for me. Of course, I have polar opposite-type dogs, so I just might be neurotic (and not in a good way). Kona, my black Labrador retriever, loves to please and work as a team, he’s intelligent, hard-working, athletic and wants to be outside on an adventure. My white English bulldog, Hoss, has always been rather lazy, stubborn, uncooperative and would rather lay on the couch than go outside (especially if it’s hot, raining or not exactly 68.5 degrees with little-to-no breeze). They both exemplify the two sides of my personality and lifestyle. Of course, that’s just self-reported data, but I tend to think it’s true.

How about you? Do your dogs reflect your personality and/or lifestyle accurately?

Why is my dog so itchy? Part 3: Lice and Mites