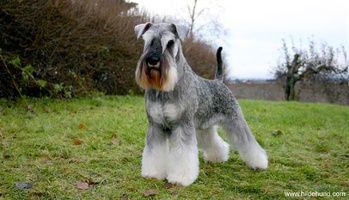 Since its origination as a rodent hunter in the late 1800s, the German-bred miniature schnauzer has become one of the most popular dog breeds in the United States. Believed to originally have been developed by breeding the standard schnauzer with the smaller affenpinscher (and possibly the poodle), the miniature schnauzer is a hardy, tenacious breed with an energetic, playful personality. Often appreciated for their natural aptitude as watch dogs, miniature schnauzers can be great family pets.

Unfortunately, like most popular dog breeds, the miniature schnauzer is known to develop some inherited diseases that can create difficulties for the breed and the people that love them. Luckily, several inherited diseases in the miniature schnauzer have had their specific genetic mutation identified and can now be prevented in puppies by testing dams and sires and using informed selective breeding techniques. Carriers of recessive genetic diseases (diseases in which the offspring must inherit one copy of the genetic mutation from each parent to show signs of disease) are particularly troublesome for breeders because despite the fact that parents carrying a single copy of a disease causing mutation are not affected by disease, they can still pass the mutation to offspring and produce affected puppies.

Myotonia Congenita: This particularly important disease is listed on the Canine Health Information Center website as an optional, but recommended test for the miniature schnauzer. Now identified in several species, including humans, myotonia congenita is marked by prolonged muscle contraction with movement and the inability to relax muscles normally. Affected dogs often have a stiff or “bunny hopping” gait, may collapse, have difficulty standing from a prone position, trouble with swallowing and abnormal bark sounds. In addition, affected miniature schnauzers often have a condition called superior prognathism in which the upper jaw overshoots the lower jaw resulting in an overbite and abnormal tooth alignment. Though the overall prevalence of the causal mutation is unknown in the breed, one study of 372 miniature schnauzers from the US, Canada, Europe, and Australia identified that 20.4% of the dogs carried a single copy of the causal mutation and 1.1% had inherited two copies resulting in them being affected with the disease. Though medicinal treatment can help with the clinical signs, these dogs are never able to exercise or eat normally.

Persistent Müllerian Duct Syndrome: This canine mutation, only reported in miniature schnauzers thus far, affects genetically male dogs (having XY sex chromosomes). This condition (a form of pseudohermaphroditism) results in male dogs having normal appearing external male genitalia while also having internal features of female structures, including a uterus, cervix and internal portion of the vagina. About 50 percent of these males have at least one testicle that remains in the abdomen (undescended) during development, resulting in increased incidence of testicular tumors and infertility. Affected dogs can also suffer from prostate developmental abnormalities, infections of the uterus, and recurrent urinary tract infections. Treatment for this condition involves removal of both the testicles (if still in the abdomen) and a hysterectomy.

Degenerative Myelopathy: A late-onset, progressive, neurological disease caused by an ancient mutation that has now been identified in more than 100 breeds of dog. This disease has been historically difficult to eliminate from bloodlines due to its late age of onset (around 7-10 years of age); long after affected dogs have already been bred and passed along the genetic mutation to their puppies. This disease normally results in the inability to walk or stand within two years of initial clinical signs and treatments are limited to physical therapy, which at best, may slow progression of the disease.

Unknown Mutations: Unfortunately, specific genetic mutations for some inherited diseases of the miniature schnauzer such as familial hyperlipidemia (a condition resulting in high levels of fats in the blood) and schnauzer comedo syndrome (a skin disorder caused by a defect in hair follicle keratinization) have not been discovered, leaving laboratories like Paw Print Genetics unable to develop genetic tests that breeders desire to identify carriers of disease causing mutations.

The miniature schnauzer has emerged over the past century as one of most popular breeds in the US. During that time, exciting genetic technologies have been developed, making it possible to eliminate certain inherited diseases from bloodlines. Through testing of dams and sires for inherited diseases, informed selective breeding practices and the genetic counseling services provided by Paw Print Genetics, the miniature schnauzer has an opportunity to navigate the coming century happier and healthier than ever!

Top 10 States for Dog Bites and Tips to Avoid Bites