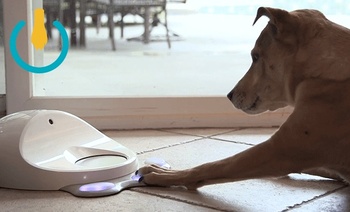 There's a pretty cool Kickstarter campaign underway (and already funded) for an interesting device that could keep your dog entertained during the day while you're at work.

The Kickstarter campaign is for CleverPet - a Wi-Fi-connected device that challenges your pet and then rewards it with kibble for correctly engaging the unit. It starts off by simply rewarding your dog for responding to what appears to be an audible cue. Then it ups the ante and rewards the dog for touching one of the device's three light-up pads. The third level of engagement requires the dog to touch a specifically lit pad to receive the food-based reward. From there, the unit interacts with your dog by rewarding her only when she solves increasingly challenging puzzles. You can even record your own voice to teach right or left. With the unit's algorithms, it adapts to your dog's learning level so it's not too hard or too easy. For you code monkeys out there, CleverPet allows you to write your own code to come up with new puzzles for your dog.

The unit's makers (comprised of PhD-level cognitive scientists, neuroscientists, dog trainers and animal-interaction specialists), have supposedly designed the unit to withstand the abuse dogs can dish out while also working with natural canine instincts such as pawing, nosing and digging. It's designed with durable rubber touch pads, a low and wide center of gravity to prevent tipping and all chewable parts have been eliminated. It features a microphone to sense barks, lights and sounds to compatible with canine vision and hearing and works with several sizes of kibble.

Because CleverPet is Wi-Fi connected, you can monitor your dog's progress remotely using your computer or smartphone.

The Kickstarter campaign was seeking to raise $100,000 to produce the units, and they've already surpassed that goal - with 17 days left, they've raised more than $125,000. The best deals are already sold out, but there's still one good deal left: pledge $199 and you'll receive a unit from the first production batch - estimated to be available in February 2015. The CleverPet will retail for approximately $280.

I have to say, I'm intrigued by this unit. I'd be interested to see how, or if, my dogs actually interacted with it. My Labrador might, but I'd be interested to see if my geriatric bulldog gave it more than a second glance (or tried to destroy). While they're both food motivated, the difference in the two dogs' temperament and intelligence levels would definitely play a role.

If the unit managed to engage them as advertised, however, it would be very cool. Cognitive challenges help keep neurons firing and stave off the effects of old age - great for our older dogs like my bully. Likewise, my Labrador is a field-bred machine that's pretty much retired due to physical issues. However, his mind and energy levels remain active and desiring of challenging work. Juggling a full-time job and children combined with my Lab's physical limitations, we can't train on challenging field concepts like we did when he was younger. Something that kept his mind engaged throughout the day would help alleviate some of the boredom a former working dog suffers when moved into retirement or when owners are at work all day.