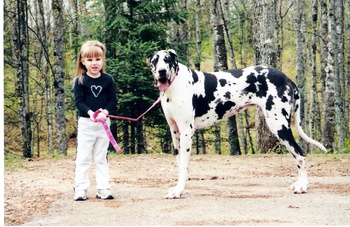 Canine coat color and traits are determined by the interaction of multiple genes, each responsible for a specific inherited trait or characteristic. The development of genetic testing for these traits has resulted in a significant paradigm shift from historical breeding practices for the dog breeding community. With a few exceptions for colors or patterns that cannot yet be tested for, genetic coat color testing has eliminated the need to perform test breedings or to make assumptions when it comes to determining what coat colors and traits might be produced by a specific breeding pair.

Despite its power, the use of genetic testing does not eliminate the artistry of dog breeding or the advantages that come from experience. Instead, genetic testing assists in eliminating some of the challenges that biology presents. Regardless of a breeder’s experience level, colors or traits that are inherited in a recessive fashion can present significant challenges when it comes to predicting potential coat color breeding outcomes. Recessive traits are those that require a dog to inherit two copies of the associated genetic variant (one from each parent) in order to display that trait. The challenge with recessive traits is that dogs which have inherited only a single copy of a recessive variant (called a ‘carrier’ of that trait) will not display the trait, making trait predictions about that dog’s offspring nearly impossible in some cases. However, two genetically confirmed carriers of the same recessive trait can be selectively bred to produce puppies with that characteristic, if desired. Conversely, if the trait is undesirable, a carrier dog can be selectively bred to a dog confirmed to be ‘clear’ of the variant, preventing the trait from being produced in that litter. Thus, allowing breeders to rapidly adapt their breeding strategies to the everchanging aesthetic tastes of pet dog lovers or fellow breeders.

Genetic tests for canine colors and traits are given letter names followed by the word ‘locus’ (plural ‘loci’) which indicates the specific location in the genome being tested. Every dog has two copies of each gene; one copy inherited from each parent. Each gene may have multiple versions called alleles, which may result in a different physical appearance in the individual. The combination of these two copies of a gene is called the dog’s genotype and is displayed with two letters that represent the copies of the gene received from each parent. If the two gene copies are each a different allele, the letters (or capitalization of the letters) representing each copy of the gene will differ. With a few exceptions, capital letters indicate a dominant trait (a trait only requiring one copy of a specific genetic variant to be displayed) while lower case letters typically indicate a recessive trait. The relationships between the alleles that a dog inherits at each locus will determine what the dog will look like. Here we discuss the genetic variants responsible for the seven accepted standard colors and patterns of the Great Dane, as outlined by the American Kennel Club (AKC):

Standard Base Colors- Fawn and Black:

Fawn- A and K loci

In contrast to the ‘ky/ky’ genotype necessary for fawn expression in Great Danes, those inheriting at least one copy of the dominant allele at the K locus (KB/ky or KB/KB) cannot express their A locus genotype. Similar to the fact that all Danes are ‘Ay/Ay’ at the A locus, all standard Danes are also known to inherit two copies of the dominant allele at the B locus (B/B) which is associated with black coat color. Therefore, Danes that inherit the ‘KB’ allele, preventing a fawn color, will instead be born with a black coat (unless modified by brindle or the D, H, or M loci; see below). A complete absence of the recessive B locus allele (b) responsible for brown in most breeds, explains the absence of brown coat color in Great Danes.

The D locus is responsible for causing a phenomenon known as coat color dilution. Dogs that inherit two copies of the recessive allele at the D locus (d/d) will be born with a diluted version of the coat color and pattern that is determined by the genotypes at the other color loci associated with Great Danes (A, Em, H, K, and M loci). Dilute black dogs (B/B, d/d) are born blue. However, coat color dilution may also result in puppies with dilute colors that are not recognized in the breed standard such as blue fawn, blue harlequin, blue mantle, and blue brindle. Therefore, if two parents each carry ‘d’ at the D locus and are also likely to produce fawn, harlequin, mantle, or brindle pups, replacing one of the parents with a dog that has not inherited the ‘d’ can prevent these non-standard colors from being produced.

Fawn Danes inheriting at least one copy of the dominant allele at the Em locus (Em/N or Em/Em) display a black (melanistic) mask on the muzzle and face. This mask cannot be identified on dogs that already have a black coat.

Danes inheriting a single copy of the dominant allele at the M locus (m/M) will be born with a merle coat color pattern marked by randomly distributed, fully pigmented black regions separated by areas of diluted coat color. Merle dogs have a DNA mutation with a piece of DNA known as an ‘insertion’ in a gene associated with pigment distribution (PMEL). This insertion is naturally unstable in its structure and may change size from generation to generation. Dogs who inherit the merle insertion can have wide variation in coat characteristics caused by this size variation. Danes with a very large insertion at the M locus, may have a similar appearance to a harlequin Dane even without inheriting the H locus variant typically associated with the harlequin appearance in the breed (see below). Danes with a very small insertion at the M locus do not show any signs of merle coat color (called ‘cryptic merle’) even though they have inherited a version of the mutation (see ‘Caution with Breeding Harlequins and Merles’ below).

Caution with Breeding Harlequins and Merles

Breeding harlequin and merle Danes brings an added responsibility due to potential health concerns or in utero mortality of offspring from parents with these coat patterns:

Dogs inheriting two copies of the dominant merle variant (M/M; called ‘double merles’) are born with a nearly all white coat and significant health problems, including vision and hearing deficits, secondary to abnormal development of the eyes and inner ears. To avoid producing double merle Danes, no two merles or harlequin dogs should be bred together. In addition, for the same reason, merles (m/M) should not be bred to harlequin dogs (h/H, m/M) as they are also known to carry the merle variant.

As stated above, Danes with a very small insertion at the M locus may not show any signs of merle coat color even though they have inherited a version of the insertion. This is particularly concerning if the cryptic merle dog is bred to a merle dog because of the rare chance that the size of the cryptic merle insertion may expand to a ‘functional’ intermediate length which can influence coat appearance when passed to puppies. Therefore, in rare cases, the outcome of breeding a cryptic merle to a merle can mirror the health concerns of breeding two dogs with obvious merle or harlequin coats. To prevent this from happening, before breeding a merle or harlequin to a non-merle dog it is crucial to test the non-merle dog at the M locus to verify that the dog isn’t actually a cryptic merle.

Brindle coat color is identified by a yellow/gold base color with alternating black stripes. At this time, genetic testing specifically for the brindle pattern is not available due to complexities of testing for this unique variant. However, it is known that a variant at the K locus is responsible for this pattern. The three possible alleles at the K locus are known to be ‘KB’, ‘kbr’ (brindle), and ‘ky’ and function on a hierarchy of dominance with ‘KB’ as the most dominant and ‘ky’ as the least dominant. If two different alleles are inherited at the K locus, the dog will display the most dominant allele. Since the specific variant associated with brindle cannot be tested for, it is unnecessary to test brindle dogs at the K locus. In fact, all brindle dogs show a ‘KB/ky’ genotype on K locus testing even though it is known that brindle dogs are actually either ‘kbr/kbr’ or kbr/ky’. Dogs inheriting one copy of ‘KB’ along with ‘kbr’ (KB/kbr) will not appear brindle because the ‘KB’ prevents the brindle from being expressed (similar to fawn).

If you have questions about coat color or disease testing for your Great Dane, please feel free to contact the Paw Print Genetics Laboratory at AskUs@pawprintgenetics.com or give us a call during business hours (8 am to 5 pm; Monday through Friday) to speak with one of our geneticists or veterinarians.