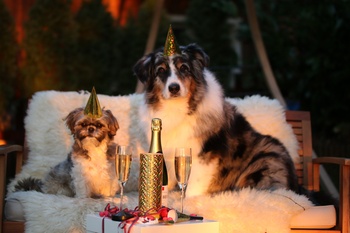 2015 was a big year for Paw Print Genetics. We made improvements to our website for easier account management, launched new disease tests, coat colors and traits, and won our lawsuit over Labrador exercise-induced collapse (EIC), so that you have choice in testing laboratories.

Our account management system is the best in the industry, but we are always looking for new ideas. Some of the website improvements made in 2015 include the ability to hide dogs within your account, share dogs between accounts and move dogs to new accounts.  What would you like to be able to do in your account? We continue to make improvements to our testing, reporting and website, all based on your input.

In early January, we launched several new, important disease tests including hereditary cataracts for Australian shepherds and related breeds and hereditary cataracts for French bulldogs and related breeds.  We also launched two progressive retinal atrophies in the golden retriever and retinal dysplasia/oculoskeletal dysplasia in Labrador retrievers.  We have many additional tests on our list to develop in 2016. We look forward to bringing you those tests throughout the new year.

Paw Print Genetics now offers 10 coat color tests and 4 trait tests.   With these additions, we now offer the most comprehensive menu for mutations in both disease genes and trait genes. To help navigate the complexities of coat color genetics, we developed a color diagram to help you better understand how these genes interact to produce the variety of coat colors seen in dogs.

Finally, on March 31, 2015, we won our case with the judge ruling that the patent for EIC was invalid. Although demonstrated several times in human genetics, with the breast cancer gene case being the most celebrated, our case was the first to invalidate a gene patent for dogs. This victory ended our litigation over EIC and allowed EIC testing from Paw Print Genetics to be certified by the Orthopedic Foundation for Animals. Although you now have a choice as to where to send your EIC testing because our victory was a win for all canine laboratories, we appreciate you choosing Paw Print Genetics for your EIC testing.

None of these accomplishments would have been possible without the support of our amazing customers.  Friend referrals continue to be the number one way for people to find us; friend referrals are the biggest compliment a company can receive! Thank you for your continued support of Paw Print Genetics.  We are excited for 2016 and will continue to be the leader in canine genetic testing.  We are honored to support you, the responsible breeder, in your quest for breeding healthy dogs.