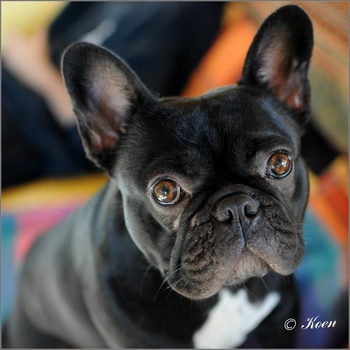 Though there are mysteries in regards to the early origins of the French bulldog, it is probable that this spunky breed is a 19th century product of breeding early English bulldogs and miniature bulldogs with other small breeds. As these smaller, English bred bulldogs became popular, many were either exported to France from England or accompanied their English owners to France in search of employment. At some point in the mid to late 1800’s, the small bulldogs were given the name “Bouledogue Français” and were recognized as their own unique breed. Early French bulldogs with either “rose ears” (ears folded at the tip) or pricked “bat ears” were common. However, with the spread of the breed to the United States, American dog fanciers created the first French bulldog breed standard describing the “bat ear” trait seen in modern Frenchies as the “correct” ear type.  In the process of establishing their modern appearance and perfecting the breed, like other purebred dogs, French bulldogs have developed some inherited diseases that concern Frenchie aficionados today. One such disease is a disorder known as hereditary cataracts (HC).

A cataract, in general, is the clouding of the lens of the eye. This cloudiness interferes with the ability of the eye to focus light on the retina which is crucial for clear vision. As the cataract matures and becomes cloudier, vision becomes worse until it interferes with daily living. There are both inherited and acquired forms of cataracts. Age related changes of the lens, chronic exposure to UV radiation from sunlight, injury, and various infections are all common causes of acquired forms of cataracts. However, far more common in dogs are cases of inherited cataracts, such as those known to occur in the French bulldog due to a mutation in the HSF4 gene leading to abnormal changes in lens proteins and subsequent cloudiness.

French bulldogs affected with HC begin to show signs of lens cloudiness in the first weeks or months of life that gradually progress to fully involve both lenses by 2 or 3 years of age, severely inhibiting vision. Surgery to remove or replace the lenses with artificial ones are the only effective treatments for cataracts. Though dogs without lenses can see, they are unable to focus on objects near to them. Replacement of the lens is the gold standard for cataract treatment and is expected to restore a dog’s vision to nearly normal. Given that expensive surgery is the only effective treatment for HC, prevention through genetic testing of breeding dogs and selective breeding practices are a much more cost effective and safer option for dogs.

HC in French bulldogs are inherited in an autosomal recessive manner meaning that a dog must inherit one copy of the HSF4 gene mutation from each parent in order to develop disease. Dogs inheriting a single copy of the mutation are carriers of the disease and will not show clinical signs of cataracts, but can have affected puppies if bred with another carrier of the same genetic mutation. Approximately 25% of puppies from a carrier to carrier breeding will inherit two copies of the mutation and thus, develop cataracts. Carriers of the HC mutation can be safely bred to dogs that have not inherited the mutation without fear of producing affected puppies. However, it should be noted that about 50% of the puppies from this pairing would also be born as carriers.

Paw Print Genetics offers testing for HC caused by the HSF4 mutation identified in French bulldogs. It has been reported that Boston terriers and Staffordshire bull terriers also develop HC due to the same mutation. Paw Print Genetics also offers testing for a different mutation in the same HSF4 gene that is responsible for causing a dominantly inherited type of cataracts in the Australian shepherd and related breeds. If you have questions about inherited cataracts in your breed or how you can eliminate disease-causing genetic mutations from your breeding program, please contact Paw Print Genetics at AskUs@pawprintgenetics.com or call the laboratory at 509-483-5950 to speak with our educated, friendly staff.