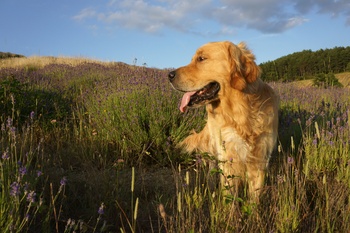 After many inquiries by our wonderful clients, Paw Print Genetics is excited to announce that we have begun testing for two genetic mutations reported to cause progressive retinal atrophy in the golden retriever. Known specifically as progressive retinal atrophy, GR1 and GR2 (PRA-GR1 and PRA-GR2), these two diseases were found to be caused by genetic mutations in the SLC4A3 and TTC8 genes, respectively. In addition to the golden retriever, the TTC8 mutation that causes PRA-GR2 has also been identified in a clinically affected Labrador retriever.

Progressive retinal atrophy (PRA) is not a single disease, but rather a group of inherited diseases each caused by different genetic mutations in different genes. The various forms of PRA affect over 100 different dog breeds. Though there are variations in the progression of disease, most varieties of PRA (regardless of genetic cause) result in blindness due to an inherited degeneration of the retina; more specifically, the degeneration of retinal cells known as rods and cones, which play an important role in vision.

In PRA-GR1 and PRA-GR2, signs of night blindness and loss of peripheral vision are seen first with progression to complete blindness occurring over time. In addition, they are both considered late onset forms of PRA. Dogs affected with PRA-GR1 will typically show clinical signs of retinal degeneration at an average of six to seven years of age while dogs affected with PRA-GR2 will typically show similar signs of disease around four to five years of age.

PRA-GR1 and PRA-GR2 are recessive diseases meaning that dogs must inherit two copies of the associated mutation (one from each parent) in order to develop disease. Dogs inheriting one copy of either mutation are considered carriers and do not show clinical signs of disease. However, if bred with another carrier of the same mutation, approximately 25% of the puppies will be born affected. In order to prevent producing affected puppies, carriers should be bred to dogs that did not inherit a copy of the same mutation (“clear” dogs). As with any inherited disease, it is not recommended to breed affected dogs.

In addition to GR1 and GR2, Paw Print Genetics also offers testing in Golden retrievers for a third form of PRA caused by a mutation in the PRCD gene, known as progressive retinal atrophy, progressive rod-cone degeneration (PRA-prcd). If you have questions about how to eliminate PRA from your breeding program or would like to discuss how PRA might affect your dog, please feel free to contact us at AskUs@pawprintgenetics.com or give us a call at 509-483-5950 and we’ll be happy to assist you!