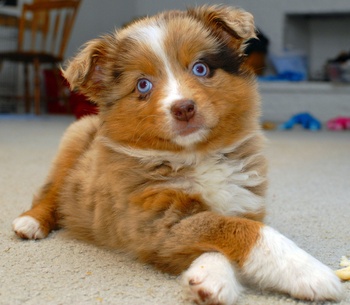 One of the hottest questions from our loyal, Paw Print Genetics clients over the past several months has been, “When are you going to offer genetic testing for hereditary cataracts?” After much preparation and anticipation, we are happy to report that Paw Print Genetics has begun testing for two different mutations of the HSF4 gene reported to cause hereditary cataracts (HC) in seven different breeds of dog.

Cataract is the term used to describe a condition in which opacities develop in the normally clear lens of the eye. The lens is responsible for focusing light onto the retina in the back of the eye resulting in acute, focused vision. With cataracts, the lens cannot focus light appropriately. This results in progressive vision deficits as the cataract increases in severity. While many cataracts identified in dogs are caused by non-inherited causes (e.g. UV radiation, infections, diabetes, chronic inflammation of the eye), as the name suggests, HCs are those passed from generation to generation. In addition, inherited genetic mutations are the most common cause of cataracts in dogs. However, by performing genetic testing on dams and sires prior to breeding, selective breeding precautions can be taken to prevent affected puppies from being born.

Though they are responsible for causing the same disease and are both located in the same place in the HSF4 gene, the two mutations now tested for at Paw Print Genetics result in HC being inherited in two different fashions (recessive or dominant) depending on which mutation is inherited:

The recessively inherited form of HC has been identified in the Boston terrier, Staffordshire bull terrier, and the French bulldog. Since it is a recessively inherited condition, by definition, affected dogs must inherit two copies of the mutation (one from each parent) in order to develop signs of disease. Dogs only inheriting one copy of the mutation are considered carriers of the disease and do not show clinical signs, but will produce affected puppies if bred with another carrier of this mutation. In order to prevent producing puppies affected with recessive HC, all carrier dogs should be bred to dogs that do not have the HSF4 mutation (“clear dogs”). As with all inherited diseases, it is not recommended to breed affected dogs. Though dogs affected with this form of HC are not born with cataracts, they begin developing them within a few months of age. Sadly, most affected dogs are completely blind by two to three years of age.

The dominant form of HC has been identified in the Australian Shepherd. Paw Print Genetics offers this test for the Australian Shepherd and its closely related breeds (miniature Australian/American shepherds and toy Australian shepherds). Though this form of HC is dominant, it shows incomplete penetrance. Since it is a dominant disease, dogs only need to inherit one copy of the HSF4 mutation in order to develop HC. However, incomplete penetrance means that not all dogs inheriting the mutation will develop disease. In one study population of Australian Shepherds, dogs inheriting a single copy of the mutation were over five times as likely to develop a cataract. Dogs only inheriting one copy of this particular mutation tend to develop a slow progressing form of cataracts that sometimes leads to complete blindness. However, it has been speculated that dogs inheriting two copies of the mutation are more likely to develop rapidly progressing, severe cataracts. Due to dominant inheritance, it is not recommended to breed dogs that have inherited this specific HSF4 mutation. The age of onset for dogs affected with the dominant form of HC is variable, but cataracts are often identified in these dogs between two and seven years of age.

If you’d like to discuss testing your furry favorites for this troubling disease or have general questions about genetic testing, feel free to contact us at AskUs@pawprintgenetics.com or call our knowledgeable staff at 509-483-5950.

Progressive Retinal Atrophy (PRA1): A Preventable Inherited Disease of the Papillon and Phalène