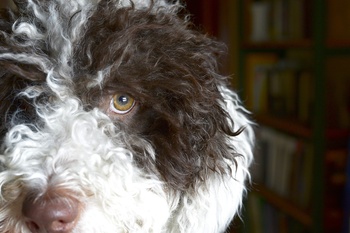 Though reliable accounts marking the early origins of the Spanish water dog (SWD) are lost to history, likely ancestors of the SWD (and probably the Portuguese water dog) were described in the Iberian Peninsula around the 12th century. Primarily used as a herding breed, the Spanish water dog has also been trained to perform tasks for fishermen and hunters including towing boats to shore, gathering fishing nets, and retrieving game from waterways. Though still used as working dogs in modern day Spain and other countries, the demand for Spanish water dogs dropped precipitously during the industrial revolution of the late 18th and early 19th centuries when machines took over many tasks historically performed by the SWD and other breeds. This decrease in demand led to a decline in the world Spanish water dog population which still remains relatively small today.

In general, dog breeds with smaller population sizes tend to also have a smaller amount of genetic diversity within the breed. This means that any two individual dogs from a small breed population are more likely to share the exact same genetic information at any given location in their genome, including disease associated genetic mutations. This is particularly concerning for genetic diseases known as recessive diseases in which a puppy must inherit one copy of the disease causing mutation from each parent in order to be affected. Since breeds with low genetic diversity share a large portion of their genome, they may also be more likely to produce diseased puppies from a random combination of dam and sire than a breed with greater genetic diversity. Luckily for dog breeders, some of these inherited diseases can be prevented by simply testing dams and sires prior to breeding and making informed breeding decisions based upon the results. One such potentially life-threatening, recessive inherited condition of the Spanish water dog is the disease known as hyperuricosuria (HUU). A mutation in the canine SLC2A9 gene associated with HUU was recently described in the Spanish water dog for the first time.

HUU is an inherited disease of multiple dog breeds marked by an elevation of uric acid in the urine. Kidneys of affected dogs are unable to adequately remove uric acid from the urine due to the presence of a malformed transporter protein which plays an important role in this normal renal function. Elevated uric acid levels in urine predispose dogs to the formation of urate crystals or stones in the bladder or rarely, the kidneys. Dogs with significant crystal or stone formation in the urinary tract often present with signs easily confused with a urinary tract infection (blood in urine, straining to urinate, and frequent urination of small volumes).

The most concerning complication of HUU is the potential for life threatening urinary obstructions where stones become lodged in the urethra, thus preventing urine flow out of the body. Though male and female dogs are equally affected with HUU, males are at greater risk of developing obstructions due to their longer and narrower urethras. Signs of urinary obstruction include abdominal pain, loss of appetite, vomiting, lethargy, and production of little or no urine upon frequent attempts to urinate. Urinary tract obstructions are serious medical emergencies and owners of affected dogs should be prepared to seek immediate veterinary care to prevent kidney failure or death if signs of obstruction are seen. Though HUU can be controlled through special prescription diets and medications, there is no cure for HUU. Even with treatment, some affected dogs may develop significant health issues related to crystal or stone formation. In contrast, despite elevated uric acid levels in the urine, not all dogs with HUU will develop urate stones.

How Is HUU Inherited?

As mentioned above, HUU is inherited in a recessive fashion, meaning that dogs must inherit two copies of the associated SLC2A9 gene mutation (one from each parent) in order to be affected with disease. Dogs inheriting a single copy of the mutation from one parent do not show clinical signs of disease, but are considered carriers of HUU and can have affected puppies if bred with another carrier of the same mutation. In order to prevent producing puppies with HUU, carriers of the mutation should only be bred to dogs that have not inherited the mutation. In general, as with most inherited diseases, it is not recommended to breed affected dogs.

Paw Print Genetics offers genetic testing for hyperuricosuria as well as one type of progressive retinal atrophy known to be a concern in the Spanish water dog. Paw Print Genetics offers the largest canine genetic testing menu in the world with over 160 different genetic tests for diseases, coat colors and traits, as well as offering parentage testing and DNA profiling services. If you have questions about how you can prevent inherited diseases in your kennel or have general canine genetics questions, please contact us at AskUs@pawprintgenetics.com or call our laboratory (509-483-5950) to speak with one of our experienced geneticists or veterinarians (Mon. - Fri.; 8 am to 5 pm).