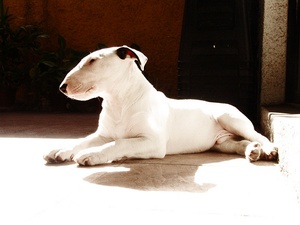 Descended from the extinct old English bulldog and Manchester terrier, the bull terrier was originally bred to help control vermin and to fight in the blood sports of bull and bear baiting. Today’s iteration looks as different as it behaves. With its distinctive egg-shaped head due to the lack of stop, the area between the eyes and across the bridge of the nose that typically leads to frontal facial features of the dog, the bull terrier is very recognizable.

The original cross was brought about to increase fighting prowess – the lighter, more agile terrier build combined with the tenacity of the bulldog made it a formidable foe. Various combinations of bulldogs and terriers also created other pit-fighting dogs such as the pit bull and Staffordshire terrier. However, the bull terrier eventually was crossed with Dalmatian, greyhound, Spanish pointer, foxhound, whippet, borzoi and collie. The first modern version of the bull terrier, one that lacked any stop at all, is credited as Lord Gladiator and is dated 1917.

While their history resides in the blood sports, the originator of the breed, James Hinks, sought a more refined companion. To this day, the bull terrier carries a cavalier attitude – not ...

Continue Reading 3 comments
Tweet
by Brian Lynn on March 18, 2014 in All Things Dog 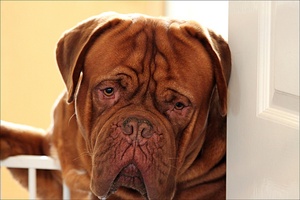 If you look at the largest dogs around, they all have some things in common. They were usually bred for work – protecting their master and their property, guarding and working livestock, hunting big game and dangerous game and, often, to fight either in battle or for entertainment.

They also share many of the same genetic diseases, which can be a clue to their often intertwined histories and evolutions. Big dogs also have special developmental needs, from feeding to exercising.

If you’re in the market for one of the largest dogs known to man, make sure you select it from genetically tested stock to help ensure that your pup enjoy as healthy of a life as possible.

Here’s a look at the largest dogs alive, their histories and which genetic mutations plague them.

Made famous in America alongside Tom Hanks in “Turner and Hooch,” the dogue de Bordeaux (above) is a mastiff-type dog with a massive head and stocky body that has been used to guard, hunt and fight both wild animals and those it was forced to square off against in a pit. While they possess a guarding instinct, they aren’t vicious and make great ...

Continue Reading 22 comments
Tweet
by Brian Lynn on Feb. 3, 2014 in Breed of the Week 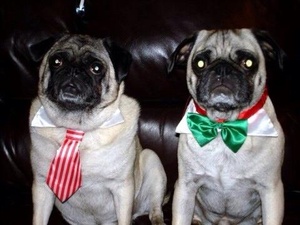 Ever a people-dog, pugs have been depicted in paintings and writings throughout history as accompanying their owners on travels, at parties, sitting in portraits and ...

Continue Reading 0 comments
Tweet
by Brian Lynn on Jan. 6, 2014 in Breed of the Week 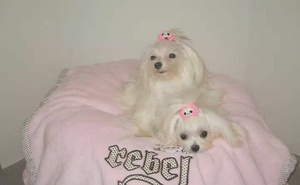 An ancient breed with a somewhat muddled history, the modern Maltese is a companion dog that has maintained its regal appearance and lovability.

The small, long-haired white dog weighs less than seven pounds (ideally four-to-six pounds) and stands seven-to-12 inches at the withers. Their long hair is silky white and lacks an undercoat. Regular grooming is required to keep it from matting, but by keeping the small dogs’ hair clipped in a “puppy cut” the maintenance can be reduced.

While the Mediterranean island of Malta is the origin of the dog’s name, the breed’s exact origin is somewhat in lost. Popular belief is that it originated in the central Mediterranean area, but there is some evidence to suggest that it came from Asia and made its way to Europe with nomadic traders.

A very old breed, Maltese-like dogs have been cited in writings since 500 B.C. Throughout history, Maltese have been linked to royalty and the affluent, including the philosophers such as Aristotle, Pliny the Elder and Strabo, the Roman Governor Publius of Malta and Queen Elizabeth I. The AKC says that even in the 1500s, the little white dogs sold for as much as $2,000! 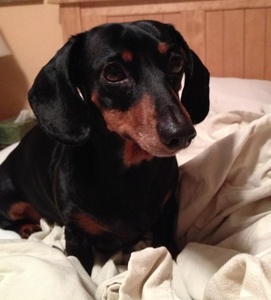 Affectionately known as the wiener dog, the short-legged, long-bodied dachshund is consistently one of the top 10 most-registered dogs in the country. It seems the dachshund has always been popular, with kings and queens of Europe in the distant past, as well as with the likes of artists such Pablo Picasso and Andy Warhol, Presidents John F. Kennedy and Grover Cleveland, writer E.B. White, newspaper tycoon William Randolph Hearst and singer Adele in more recent times.

The popular dachshund originated in Germany and was bred to track badgers, enter their den and fight them to the death. The modern dachshund is much smaller than the badger-fighting ancestor, which weighed between 30 and 40 pounds, and is usually bred for the conformation ring and as a companion animal. However, there are lines, especially in its native Germany, that are still bred for hunting purposes.

The history of the dachshund is somewhat muddled, with some groups claiming it was developed in the 18th and 19th centuries, others claim the 15th Century and still others cite drawings and mummies of dachshund-like dogs that were popular with ancient Egyptians. The modern-day incantation was developed in Germany, but was also ...

Continue Reading 0 comments
Tweet
by Brian Lynn on Aug. 13, 2013 in Breed of the Week 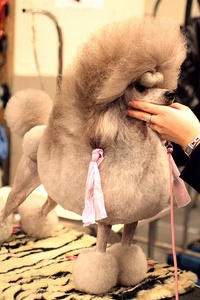 Poodles were originally used for retrieving downed waterfowl for hunters. Their dense, tightly curled and water resistant coat helped keep them buoyant and insulated in the cold water. There are kennels throughout the country that are working to continue the hunting heritage of the poodle by training and testing them in hunting venues. Poodles have also been used since the 17th Century as war dogs, including during World War II as guard dogs. They also compete in obedience, agility, tracking and even ...