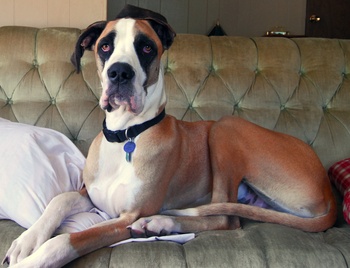 Seeing a dog with a distended stomach, unproductive attempts at vomiting, weakness, and rapid, strained breathing is sure to strike fear into the heart of any dog breeder or owner. These classic signs of gastric dilatation and volvulus (GDV) or “bloat” as it is colloquially known, are the worst enemy of anyone who has experienced this traumatic, life-threatening condition that often affects otherwise healthy dogs. The significance of the heartbreak caused by this disease has been made obvious to me by the numerous clients that have inquired about genetic testing for this condition at Paw Print Genetics. Though many suspects have been implicated in the cause of GDV in our dogs, unfortunately no single risk factor, including a genetic mutation, can adequately explain the lion’s share of cases at this point. With an estimated 21-24% chance of large and giant breed dogs developing GDV within their lifetime (Broome and Walsh 2003), it is no surprise that people would love to find an easy, low-cost and predictable way to prevent this disease.

GDV is a condition marked by rotation of the stomach on the upper end near the esophagus. This rotation closes off the opening between the stomach and esophagus, thus preventing the dog from burping. In addition, the stomach fills with a rapid accumulation of gas that adds pressure to the walls of the stomach and causes thin walled veins to collapse while the thicker walled arteries stay open and continue to allow blood flow into the region. The inability of the veins to return the blood to the heart leads to severe back up of blood in the vessels, oxygen deprivation to abdominal organs and multi-organ failure. In addition, the extreme distension of the stomach with gas makes respiration difficult due to pressure on the diaphragm (the sheet of skeletal muscle that helps us breathe). Without treatment, progression of the disease leads to shock, coma and death. But what causes the stomach to rotate in the first place?

Though numerous risk factors have been identified, no one is sure what causes the rotation. Scientists have tried to understand the order of events in GDV for years, but not being able to see the event occur in real-time has made a breakthrough difficult. One area of study has looked at whether the stomach fills with air before or after the rotation. A commonly held theory has been that the dog played a role in the distension of the stomach due to swallowing air (a relatively common occurrence). A recent study however, showed that the gas in the stomach of affected dogs was of a very different composition than atmospheric air, thus invalidating this theory (Van Kruiningen et al. 2013). The investigators in this study concluded that the most likely cause of gas accumulation in the stomach is due to bacterial fermentation either from bacteria consumed with a particular food source or from intestinal bacteria introduced to the stomach due to reflux from the intestinal tract (another common occurrence). However, even with the assumption that gas buildup is due to fermentation, it is unknown whether it is the primary cause or a secondary effect of rotation.

A review of literature on GDV by Broome and Walsh (2003) listed many factors that have been shown to increase risk of the disease. These include being a large breed dog, concurrent diseases, food particles smaller than 30 mm in diameter, dry food, eating one large meal per day, rapid food consumption, elevated food bowls, stressful events, fearful personality type, genetics, inflammatory bowel disease, and older age. The Canine Health Foundation website also lists high water intake and activity after eating as risk factors. Given such a large list of potential causes, most owners would find it difficult to avoid them all, even with the best of intentions. And as most medical professionals know, when a particular disease has a large list of risk factors (such as in GDV), the most important cause is often undetermined.

Once a dog develops GDV, treatment revolves around fluid therapy to correct acid/base imbalances and treat shock, depressurizing the stomach, and surgical intervention to tack the stomach to the abdominal wall in a procedure called a gastropexy that prevents future rotation. Because GDV is so common in large breed dogs, many large breed owners choose to have a preventative gastropexy performed at the time of spay or neuter to keep GDV from ever occurring.

Though it would be wonderful to find a single genetic cause of the disease, I suspect that we will find GDV to be a complex, multifactorial disease involving both genetic and environmental factors. Thanks to grants by the German Wirehaired Pointer Club of America, Orthopedic Foundation for Animals, and the Poodle Club of American Foundation, Dr. Claire Sharp of Tufts University will begin a two-year study on the genetic, hormonal, and molecular factors contributing to GDV on January 1, 2014. You can donate to the grant or learn more here. Hopefully through this study we will find the answers that have evaded us over the years. Until then, the best we can do is preventative surgery, minimizing the number of risk factors in our large breed dogs’ lives and getting medical intervention immediately if signs of GDV are seen.