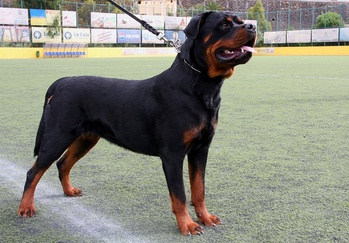 Descended from Roman drover dogs, which were used to drive and protect the cattle herds of Roman soldiers on the warpath, the Rottweiler maintains its herding and guarding instincts to this day, while also using its intelligence, size and athleticism to perform duties as varied as police dog, guide dog and search-and-rescue dog.

The Rottweiler was developed in the German town of Rottweil, where its continued use was as guardian and protector of cattle being pushed to market. They were also used by butchers as guard dogs, which earned them the nickname ‘butcher dogs.’

Two historic events played a huge role in the Rottweiler’s popularity. Technological advancements, specifically the railroad, nearly led the breed to extinction. As railroads could move goods to market faster, cattlemen began using the iron horses instead of driving them with dogs. Throughout history, many breeds have gone extinct when their primary purpose was supplanted by technological advances or social changes.

The two great World Wars also nearly led to the extinction of several breeds, but for the Rottweiler, it was a saving grace. The demand for police dogs grew exponentially with the wars, and that renewed interest in Rotties, which were used as draught, messenger and guard dogs.

Since that renewal of interest, the Rottweiler has never again faced extinction. They were formally recognized by the American Kennel Club in 1931, and in the mid-1990s they climbed into the top ranks of the most registered dogs – in 2013 they were the ninth-most registered.

A medium-to-large, robust and powerful dog, the Rottweiler stands between 22 and 27 inches at the shoulder and generally weighs around 100 pounds or more. Their black coat with rust to mahogany markings is straight, coarse, dense and of medium length. The singular look of the proportionately built and powerful, black-and-tan marked dog that hasn’t changed much since the early 1900s makes it readily identifiable.

Because they are robust, strong dogs with inherent guarding instincts, they will naturally protect their property and family. Most of the time they take a “wait and see” attitude when interacting with their environment, but they are not fond of strangers – again, due to their early use as guard dogs. Proper training, socialization and exercise are highly recommended, as they are for any breed.

Rottweilers are fairly healthy dogs from a genetic standpoint. They, like many breeds, carry the gene mutation for degenerative myelopathy. Paw Print Genetics can screen a Rottweiler for degenerative myelopathy – an autosomal recessive neurological disorder – and can explain the results as they pertain to your dog’s health, breeding strategies and the health of its puppies.

Rottweilers are also prone to hip dysplasia, the eye issues of entropion and ectropion, cancer (the leading cause of early deaths in the breed), as well as being more susceptible to parvovirus.

On the Front Lines of K9 Genetic Health

Skeletal Dysplasia 2: A cause of dwarfism in the Labrador retriever