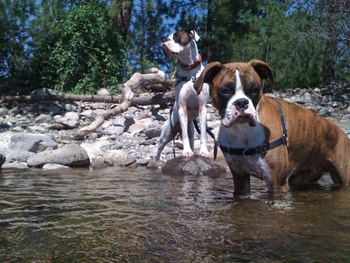 Athletic and intelligent, the boxer has perhaps one of the most malleable of personalities and range of inherent traits, allowing it to perform in a wide array of roles. From companion and competitor to guard and war dog, the boxer is as fierce and intimidating as he is lovable and laughable.

Good with children, being both affectionate and patient, boxers do best when companions are near – be them human or canine. They enjoy a group setting, and will engage in cuddling, playing or working. They have a protective streak, which in combination with their affectionate nature makes them a popular choice among families. The breed holds strong in the top ten of breeds registered with the AKC, typically averaging as the seventh-most registered dog.

The boxer can trace its origin to 1890s Germany and the now extinct Bullenbeisser dog – a mixture of mastiff and bulldog. Directly descended from these dogs, which were used for fighting and hunting, the boxer was at first employed in a similar manner but performed the duties with more athleticism. While at first used as catch dogs on the hunt, boxers were later used as military dogs during World War I – performing as messengers, pack-carriers, guard dogs and attack dogs. After the war, the boxer’s popularity soared and they were incorporated into the home as companions, show dogs and guard dogs. Due to their high intelligence, they’ve even been used as guide dogs for the blind. Owners of boxers also compete in agility, obedience and flyball events. They’re also used as service and therapy dogs, in K9 units on police forces and even as herding dogs.

An alert boxer is the epitome of the canine athlete. Medium in size, they appear well muscled and powerful with a short, flat coat in fawn or brindle (with or without white) and a black mask that is tight to the body and requires little attention. Their head is of utmost importance; it should be of proper form and proportion. Boxers are brachycephalic, meaning they have broad, short skulls with an undershot lower jaw – think bulldog, but not as extreme, which keeps allows them to breathe easier and to be more athletic.

Boxers enjoy a lifespan of approximately 10 years or so, and face a few health issues, including congenital sensorineural deafness in white boxers. Cancer, heart conditions, hip dysplasia, epilepsy, gastric torsion and entropion are a few issues. Cancers are by far the greatest concern to boxers, and accounted for 38.5 percent of deaths in one UK Kennel Club study.

At Paw Print Genetics, we offer a single test for boxers – degenerative myelopathy, a neurologic disorder that affects the white matter tissue of the spinal cord and is considered the canine equivalent to amyotrophic lateral sclerosis (Lou Gehrig’s Disease) found in humans.

For prospective puppy buyers or boxer breeders, testing parents for physical issues – heart, hips and eyes – as well as genetic mutations such as degenerative myelopathy, will help promote healthy puppies who enjoy a long life.

Breed of the Week: Mastiff

Ten of the Biggest Breeds – and the Diseases that Afflict Them