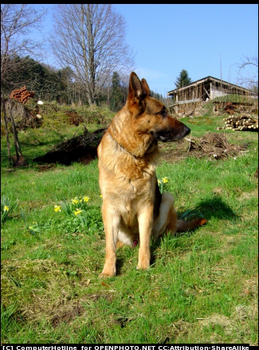 That study, as well as some great background information on breed intelligence, trainability, propensity for the guard duty, intimidation factors, etc., came from a great article with several sources entitled "Dogs and Personal Security: An Introductory Guide," which ultimately suggest the following breeds as the best dogs for guard duty (in no particular order):

Like all dogs, especially purebreds developed to carry out a specific task, these guard-dog breeds can carry genetic mutations that can lead to diseases that can impact the dog’s quality of life or lifespan, as well as your pocketbook.

The article does a good job of summing up genetic defects and the dichotomy of popular breeds and less popular breeds in regards to overall health and likelihood of research:

"ALL breeds are subject to genetically-linked defects in health and temperament. Working with a good breeder minimizes (but does not eliminate) the chance that one will end up with a defective dog.

Don't be scared by talk of genetic defects and health problems. Although some breeds have been severely damaged by poor breeding, the best response to a long list of possible defects and problems is to be alert for them at the outset. Also, keep in mind that the length of a list may reflect the state of knowledge about a breed more than the likelihood of running into problems. Uncommon breeds are generally less well studied than more common breeds, and so may have shorter lists. A defect in an uncommon breed may also propagate more quickly and be harder to eliminate from the smaller population. Popular breeds will generally have longer lists in part because they've been studied more intensively."

Evolution of the Canine