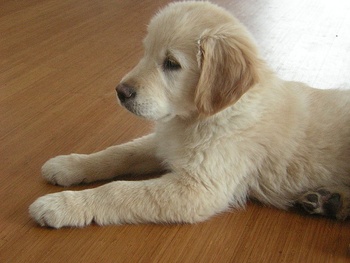 When it comes to diagnosing genetic conditions in dogs (or in humans), doctors use a variety of clues.  One of those clues may not necessarily be what the physical symptoms are, but when did the physical symptoms start happening.  Today’s blog focuses on the when, not the what, of genetic diseases.  Although the when of genetic disease does not exclude the importance of what; when will be today’s topic.  Now that I’ve thoroughly confused you and you may be thinking about the old slapstick comedy routine “Who’s on First” by Abbot and Costello, let’s get started.

“Congenital” is a term that often floats around the medical community when discussing disease symptoms.  It simply means “present at birth”.  This complicated word comes from the Latin root “congenitus”, which literally means “born together with”.  Con – with; genitus – to bear, or beget.  If a symptom or group of symptoms is seen right when a pup is born, it is congenital.  When making a diagnosis of an inherited genetic condition, knowing the symptoms are congenital can shorten the list of what genetic condition may be the cause.  Only recently has canine genetic testing been made available to possibly confirm the diagnosis.

Other canine genetic conditions have symptoms that may occur as a pup grows into adulthood.  Luckily, the words to describe this involve no Latin roots at all.  “Adult-onset” means the age of onset of a disease (symptoms) is not until the dog is an adult.  These diseases may occur at age 3, 4, 5, etc.  There may be an age range for when symptoms can be expected.  In these conditions, pups appear healthy until they hit the target age range.  Although the symptoms are adult-onset, and not present at birth; the genetic change is congenital, and is still present at birth.

One more word that defines the when of symptoms is “progressive”.  This word describes how the severity of a genetic disease changes over time.  If symptoms are progressive, they usually get worse as the dog ages.  Quite often, adult-onset conditions are progressive.  Symptoms may be slight and hardly noticeable at first.  As time goes on, they only get more severe.  Additional symptoms may also be seen with time.  On the other hand, congenital symptoms, or features seen at birth, may or may not be progressive.

An example of a congenital progressive genetic disorder is ichthyosis, which is a skin condition in Golden retrievers. Features of the disease include areas of bald patches, thickened skin, and dull hair. Over time the skin develops a grayish color and appears scaly. These dogs are also at increased risk for skin infections. There is currently no treatment for this condition.  .  Ichthyosis is caused by a mutation in the PNPLA1 gene and genetic testing is available.

Degenerative myelopathy is an adult-onset, progressive neurological disorder found in dozens of breeds of dogs.  It’s very similar to Lou Gehrig disease in people.  Degenerative myelopathy may be misdiagnosed as arthritis in the early stages.  The disease is progressive and eventually dogs are unable to walk.  An affected dog may not be diagnosed before breeding because of the later onset of symptoms (as late as 8 or 9 years old).  Symptoms include muscle atrophy beginning in the pelvic limbs and dogs eventually become unable to walk. In addition, dogs may also lose fecal and urinary continence late in disease progression.  Affected dogs may fully lose the ability to walk 6 months to 2 years after the onset of symptoms. Owners often elect euthanasia when their dog can no longer support weight in the pelvic limbs.  Degenerative myelopathy is caused by mutations in the SOD1 gene and genetic testing is available.

Congenital, adult-onset, and progressive are very important words that describe when a dog may show disease symptoms.  Understanding these terms will help owners realize how a veterinarian makes a list of what diseases may be causing symptoms.  Fortunately, genetic testing technology is a recent, added tool when making a diagnosis.  Genetic testing may confirm a diagnosis given by the observant veterinarian as they figure out what disease may be affecting a dog.

Image of a 12-week Golden retriever from Wikimedia Commons

Ten of the Biggest Breeds – and the Diseases that Afflict Them