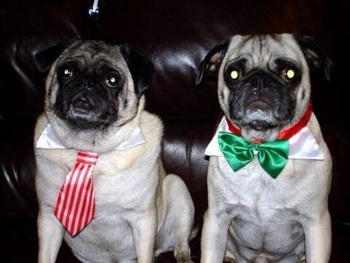 Ever a people-dog, pugs have been depicted in paintings and writings throughout history as accompanying their owners on travels, at parties, sitting in portraits and used as carriage dogs – often times dressed in appropriate attire (a tradition that’s still popular with many pug owners today).

While the physical characteristics of the pug have changed through the centuries – earlier versions of the breed were taller and leaner with longer noses (today’s style – short, compact with a more brachycephalic appearance – likely developed around the 1860) – their personalities have remained constant. The pug is a stable, happy and playful breed that is outgoing. They can be strong-willed but aren’t aggressive. They have an innate ability to connect with and entertain their owners.

Pugs are a smaller breed, square and compact with well-muscled body and, according to AKC standards, weigh 14-18 pounds. Acceptable colors are fawn and black with a black mask.

Their small size makes pugs great dogs for apartment living, and their stable personality makes them a great choice for families. Despite being small, pugs do compete in agility tests and can undertake moderate exercise – as with all brachycephalic dogs, you have to be careful of heat and breathing issues.

Pugs enjoy a fairly long lifespan – averaging between 12 and 15 years. However, because they have been bred for extremes – a smaller size, large eyes and brachycephalic faces, many health issues plague the breed, as do some genetic disorders.

Eye issues such as prolapses, corneas and entropion can affect pugs, and they’re one of the most severely affected breeds when it comes to hip dysplasia. Demodectic mange, necrotizing meningoencephalitis, hemivertebrae and breathing issues are other problems that plague the breed.

Anyone wanting to buy a pug puppy or who is thinking about breeding a pug, should seek to do so from dogs that exhibit as few of these issues as possible  – and in the case of genetic testing should be cleared by a Canine Genetic Health Certificate© from Paw Print Genetics.

Dermoid Sinus: Are we on the “ridge” of a paradigm shift?