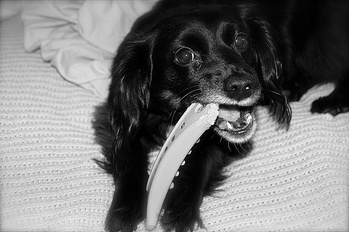 Canines of all ages are notorious for eating the oddest things. From leftovers in the garbage to rocks in the yard, some dogs will consume anything. While their self-induced supplementary diets can make for interesting story sharing, the actual act can pose a risk (life-threatening sometimes) and can cost you a lot of money in emergency vet fees.

Sometimes the weird things dogs eat can be avoided. Sometimes they can’t. I’ll be honest, my dogs have eaten some things that aren’t so good for them, and sometimes that was my fault and others times it just happened.

Hoss, my English bulldog, once ate a pair of my shoes. That was my fault, as I left them on the floor where they would become the subject of his inquisitive puppy nature. The corner of the wall he ate, however, was (I’m convinced) simply because it was in front of him when he woke up. The television remote was left on the couch where he could find it. Likewise, he was left alone in the car with the Labrador’s frozen training ducks. These are just a couple of examples of things one of my dogs has eaten.

If you noticed a pattern here, most of the items the bulldog has eaten has been avoidable. Usually, that’s how it goes – we, as dog owners, are at fault for leaving something where an inquisitive puppy or bored dog can find the item and play with, destroy or consume it.

If you have a young dog, puppy-proof your house: pick items up off the floor, restrict access to rooms and monitor the new addition when it’s loose.

Sometimes however, it’s not possible to monitor your dog every second they’re out. I’m not referring to items left on the floor, but to being out in the field with a working dog or out hiking and the dog is off leash. Dogs can wolf down discarded food, dead critters or drink contaminated water in mere seconds. It’s nearly impossible to keep an eye on them every second of every day. My Labrador, Kona, had several dangerous bouts with diarrhea because the neighbors used to dump their leftovers (including cooked chicken and pork-chop bones) over their fence into the field where I’d let him run off leash. He would consume these bones in a chomp or two and it took forever to figure out what was going on; the bones were shredding his insides and causing GI damage.

Acute diarrhea is more than just messy, it's dangerous and can indicate anything, including an upset stomach, a swallowed object, stomach/intestinal damage, parasites, bacterial infections or an indicator of liver and kidney issues. In addition to the primary disorder causing the GI track troubles, diarrhea can quickly dehydrate a dog.

If your pup has diarrhea and it doesn't stop, or at least start to firm up, and/or contains blood, after 24 to 48 hours (depending on severity; I took Kona in at about the 30-hour mark) you need to take him to the vet (if you're in doubt, err on the side of caution and make the trip).

You can try to give them Imodium but not all dogs respond to the medication. Because Kona was in his prime, showed no signs of dehydration or loss of appetite and wasn't lethargic, we didn't run any tests and opted instead to go with 500mg of Metronidazole (AKA: flagyl)— a broad-spectrum antibiotic that would address dietary issues, such as eating something from the garbage or out in the field (one of the most common reasons for acute diarrhea, according to the vet), as well as bacterial infections such as Giardia (which for a Lab is quite possible as any water is prime swimming water, regardless of depth or freshness).

If your dog is lethargic, won’t eat, vomits and/or loses weight, you might be dealing with a obstruction in the GI tract. Get to a vet so that they can determine if that’s the problem and remedy it with surgery if necessary. It’ll be an expensive bill – probably $1,500-$2,500.

Exercise, training and maturation can help a dog learn what is acceptable to chew on and what is not. However, some dogs will continue to eat rocks and whatever other odd items spark their interest for their entire lives. If you have one of those dogs, take all the precautions you can and keep an eye on them as much as possible.