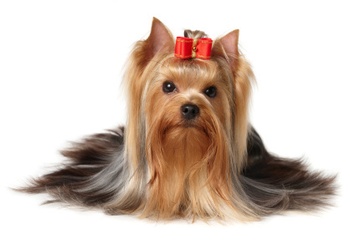 Originally bred as a ratter, the Yorkshire terrier quickly became a show-dog darling and companion animal for the middle and upper classes – roles it retains to this day.

Yorkshire terriers, or “Yorkies” as they’re affectionately nicknamed, were derivates of terriers from Scotland that were crossed with the now extinct Paisley terriers, which possessed a long and luxurious coat. While they are show dogs today, Yorkies originated within the working class during the 19th Century and were developed and used by those in textile mills to find and kill rats – a job they were very good at thanks in large part to the tenacious terrier personality. Later, they were used in rat-baiting competitions – a practice where they would be placed in a pit or other enclosed area with rats, and then bets were placed on how many vermin the dogs could kill in certain amount of time.

According to P. H. Combs in The American Book of the Dog, when the breed was first being developed, “almost anything in the shape of a Terrier having a long coat with blue on the body and fawn or silver coloured head and legs, with tail docked and ears trimmed, was received and admired as a Yorkshire Terrier." Later, the breed underwent more refinement, much of which was accomplished around Yorkshire in England, which is why the breed sports the location’s name, and included a show dog named Huddersfield Ben, who was owned by Mary Ann Foster, and who won many competitions as both a show dog and a ratter. Huddersfield Ben is considered the foundation stock of the breed, and a dog that sired many consistent puppies during his short lifespan and helped solidify the Yorkie standard.

That standard is summarized as: “That of a long-haired toy terrier whose blue and tan coat is parted on the face and from the base of the skull to the end of the tail and hangs evenly and quite straight down each side of body. The body is neat, compact and well proportioned. The dog's high head carriage and confident manner should give the appearance of vigor and self-importance.”

The coat of the Yorkie is of utmost importance, with many fine details of shades and markings in the standard. Those include: “color of hair on body and richness of tan on head and legs are of prime importance in adult dogs, to which the following color requirements apply: Blue: Is a dark steel-blue, not a silver-blue and not mingled with fawn, bronzy or black hairs. Tan: All tan hair is darker at the roots than in the middle, shading to still lighter tan at the tips. There should be no sooty or black hair intermingled with any of the tan. The blue extends over the body from back of neck to root of tail. Hair on tail is a darker blue, especially at end of tail.” The Yorkies coat, while strictly defined by color and markings, can be kept long for show dogs or clipped for easier care of pet dogs.

While Yorkies started out in the blue-collar homes of textile-mill workers, they quickly became popular in the hearts and homes of middle- and upper-class families as companion and show dogs. With their past as a ratter, they’re confident, active dogs with a protective streak. They’ll bark at strangers but also love being the center of attention and will sit on your lap for hours. Stanley Coren ranks them as the 27th most intelligent dog in his book The Intelligence of Dogs.

As small dogs, Yorkies typically enjoy a long lifespan, averaging 17-20 years. They do however suffer from several medical issues, including digestive issues, cataracts and other eye problems, liver complications and structural problems.

If you order a panel test that includes all three diseases by Oct. 20, 2013, you can receive 15-percent off the cost of the order by using the code “FBYORK” at checkout.

My bird dog isn't hunting like he used to. What's wrong Doc?

Upfront Costs: The Smallest Financial Burden of Owning a Dog