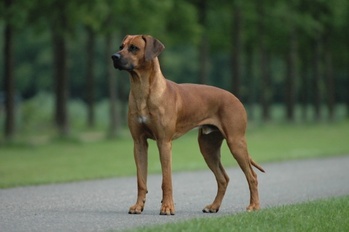 Since early in canine domestication, humans have been selecting individual dogs with desirable behavioral and physical traits to be founder breeding animals for the hundreds of dog breeds we have today. Early on, the traits selected for were often of great importance for their role as working animals. With time, as the world of dog fanciers took shape, dogs with particular physical traits of aesthetic value began to be the chosen bearers of future generations regardless of their ability to work. Unfortunately however, there are multiple examples of selected physical traits that are significant risk factors for disease.

One important example is a disorder seen in Rhodesian ridgeback (RR) dogs known as a dermoid sinus that has been associated with the characteristic “ridge” trait in the skin overlying the spine. In 2007, a large genetic duplication on canine chromosome 18 was identified as the underlying genetic cause of the ridge in this breed.2 Unfortunately, the same genetic duplication responsible for ridge formation has also been found to predispose RRs to formation of dermoid sinuses.1,2

Dermoid sinuses are tubular to round shaped cavitations in the skin often filled with hair and keratin that are present at birth. It has been estimated that about 8-10% of ridged RR are born with dermoid sinuses.2 The lesions are similar to neural tube defects found in people and in some cases, the sinuses can run as deep as the spinal cord. In cases where the sinuses are lined with hair, dogs are prone to painful inflammation and accumulation of fluid as the body mounts an immune response against the hair which it treats as a foreign substance. Draining tracts often open on the dog’s back providing a pathway for the accumulated fluid to vacate. These openings allow bacteria to invade the sinus thus predisposing the dog to infection. In cases where the sinus connects with the spinal cord, inflammation and infection can cause life threatening damage to the central nervous system.

The mutation causing the RR ridge is inherited in an autosomal dominant fashion meaning that dogs only need to inherit a single copy of the mutation from one of its parents to develop a ridge (dogs with one copy of the ridge mutation are noted by the letters “Aa”).1 Dogs inheriting two copies of the mutation (one copy from each parent; noted by the letters “aa”) also develop the ridge, but are at increased risk to be born with dermoid sinuses in comparison to dogs inheriting only one copy.2 In a study of twelve RRs with dermoid sinuses, ten of them were aa and only two were Aa for the ridge mutation.2 Though it is known that inheriting two copies of the ridge mutation increases risk of dermoid sinuses, it is unknown how much the overall risk increases due to the presence of the second copy and dogs with only one copy are also at risk, albeit, a lesser risk.

Despite the ridge mutation being known, there are no commercially available tests that can distinguish between dogs with one or two copies of the ridge mutation. Historically, RR breed club standards have discouraged the breeding of both ridgeless (noted as “AA”) and dermoid sinus affected dogs. In addition, ridgelessness in RRs is considered a breed specific disqualification in the conformation ring thus making AA dogs even more undesirable. Due to this, many ridgeless RRs were historically euthanized. A national health survey of members in the Rhodesian Ridgeback Club of the United States in 1996 (and updated in 2001), listed the number one cause of death or euthanasia in the breed to be due to ridgelessness. Though anecdotal reports suggest that fewer breeders currently euthanize ridgeless dogs, there is still a general guideline among RR clubs (including the national RR Clubs of Great Britain, the United States, and Canada), that ridgeless dogs should never be bred and should be spayed or neutered prior to sale. However, there may be an important place for ridgeless RRs when it comes to decreasing dermoid sinus.

In a study of Swedish RRs, it was found that about 80% were Aa, thus making up the majority of the current breeding population.2 If two of these dogs are bred together, statistics tell us that 25% of the offspring will be AA, 50% will be Aa, and 25% will be aa and will have an increased risk for dermoid sinus formation. An alternative breeding practice that would decrease the incidence of dermoid sinus would be to breed ridgeless RRs to healthy, ridged aa or Aa dogs. This crossing would result in a large percentage of the puppies being born as Aa and therefore, at a lower risk for developing dermoid sinuses while still maintaining the characteristic ridge. Healthy dogs with two copies of the ridge mutation (aa) would likely be most desirable for breeding in the proposed breeding program due to their ability to consistently produce 100% Aa puppies (with a ridge and lower risk of dermoid sinus) when bred to a ridgeless, AA dog. Unfortunately, in the absence of a genetic test, the only current way to be sure that a RR carries two copies of the ridge mutation is to do a test mating to a ridgeless RR and see if any ridgeless puppies are born.

Though test breedings would result in the birth of significant numbers of ridgeless dogs, once a dog carrying two copies of the ridge mutation was identified, no further test breedings would need to occur until a new breeding animal was desired. Therefore, though it is debatable, it is likely that the overall population of ridgeless dogs born annually would decrease by using this strategy, especially if healthy aa dogs are used for breeding with them. In addition, since they would be used in the proposed breeding program, ridgeless dogs would have an increased value in the RR community potentially decreasing the likelihood that they are euthanized. While a genetic test to differentiate between dogs carrying one or two copies of the ridge mutation would make this new breeding paradigm much easier to institute, through test breedings, it is possible to discover an appropriate dam or sire to breed to your favorite ridgeless dog, thus decreasing the incidence of dermoid sinus.

It is a new day for dog breeding. By using the current knowledge of genetic inheritance, it is possible to change the way dams and sires are chosen for breeding programs and as a benefit, improve the overall health and happiness of your favorite breed.

Understanding the 'Why' of Training

Breed of the Week: Pug