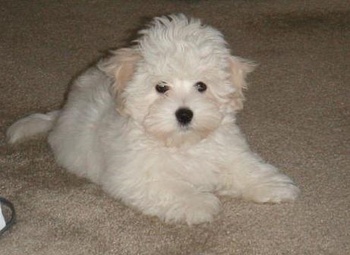 There are not many dog breed names that give a more apt description of the breed’s physical appearance than that of the coton de Tulear. Taken from the French word “coton”, meaning cotton, the coton de Tulear’s signature soft white hair (not fur) has long been compared to the fluffy fiber of the cotton plant. According to the Malagasy Coton de Tulear Club of America, the coton de Tulear was developed in Madagascar around the 17th century and is still the official dog of this island nation. Predecessors to the modern coton de Tulear were likely brought to the island by sailors or pirates around this time period. Though they are generally a healthy breed, unfortunately, like other purebred dogs, the coton de Tulear is known to inherit some genetic diseases that can make life challenging for this small, friendly companion and those that love them. One such inherited disease of the coton de Tulear is a severe condition known as primary hyperoxaluria (PH) that occurs due to a mutation in the AGXT gene.

Dogs affected with PH lack the ability to produce an enzyme that plays an essential role in the breakdown of a compound known as glyoxylate. As a consequence, oxalate and calcium oxalate crystals accumulate in tissues of the body, particularly the kidneys. Affected dogs reportedly present with general signs of kidney failure at around 3 to 4 weeks of age that can include, lack of appetite, vomiting, lethargy, abdominal pain, decreased urine production, and blood in the urine. Most affected dogs die or are humanely euthanized by 8 weeks of age due to the severity of this condition. Interestingly, mutations in the AGXT gene are also known to cause a severe, inherited disease in people that leads to kidney failure in about 80% of affected individuals by age 30.

In one study of 118 coton de Tulears from 28 different Finnish kennels, 8.5% were found to be carriers of the AGXT gene mutation associated with PH. Paw Print Genetics offers testing for primary hyperoxaluria as well as four other inherited diseases reported to cause disease in the coton de Tulear. If you’d like to discuss how testing for this inherited disease relates to your kennel or if you’d like to know about the genetic health of your coton de Tulear, please email us at AskUs@pawprintgenetics.com or call the helpful Paw Print Genetics staff at 509-483-5950.