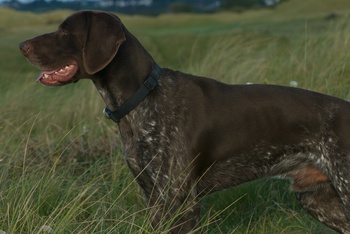 If you already own a German shorthaired pointer (GSP) or if you are currently in the market for one, you likely realize the high level of intelligence and performance of this breed. With proper training, this high energy gundog can become a hunter’s best friend. Whether running long distance across rough terrain or diving into the water to retrieve a bird, the GSP is happy to work hard, please their owner and most of all, to hunt. Though a relatively healthy breed overall, like all dog breeds, sometimes GSPs can be born with inherited conditions that make life difficult for them or prevent them from doing the jobs that they were bred to perform.

Some diseases reported in GSPs such as hip dysplasia, entropion, and some cancers, are likely inherited though the specific genetic mutations associated with these disorders are currently unknown. On the other hand, GSPs also can inherit diseases caused by known genetic mutations. Knowledge of specific mutations and how the diseases are inherited, allows for laboratories such as Paw Print Genetics to develop tests to identify dogs that are either genetic carriers or are affected with a particular disease. Paw Print Genetics offers tests for three inherited diseases of GSPs; cone degeneration, degenerative myelopathy, and von Willebrand disease type II. All three of these diseases can have a significant impact on your dog’s quality of life, longevity, and its ability to work.

Cone degeneration is an early onset, progressive disease of the retina resulting in loss of vision in day light (“day blindness”) typically beginning at about 8 to 12 weeks of age. Complete degeneration of retinal cone cells (and complete blindness in day light) is seen by the time affected dogs become adults. Though these dogs can still see in dim light conditions, it is easy to see how this disease could decrease an active dog’s overall quality of life.

Degenerative myelopathy is a late onset, progressive neurological disease similar to amyotrophic lateral sclerosis (Lou Gehrig’s disease) in people. Dogs affected with this condition do not usually show clinical signs of disease until around 8-9 years of age. Dogs most commonly present with weakness in the hind limbs that is often mistaken as arthritis, vertebral disease or hip dysplasia by owners. Dogs with this condition are typically free of pain, but the weakness progresses forward on the body, leading to front limb weakness, urinary and fecal incontinence and the inability to walk. The disease typically progress rapidly after initial signs appear and many dogs are unable to walk within 6 months to 2 years after initial presentation. The late age of onset makes selective breeding in the absence of genetic testing difficult because affected dogs typically do not show clinical signs until long after they have been bred and passed along the causal mutation to offspring.

Von Willebrand disease type II is a moderate to severe blood clotting disorder present from birth, characterized by an inability to clot appropriately after trauma or surgery. Severity of this disease varies greatly from dog to dog. Some dogs will spontaneously bleed from the nose or mouth or have blood in urine or stool, while other affected dogs will remain undetected until a traumatic event or surgery when severe bleeding occurs. Breeding females may also have excessive bleeding associated with heat cycles. Surgical procedures should not be performed on affected dogs without ready access to blood products for transfusion.

Though these three inherited diseases are troubling, there is no reason a puppy has to be born with them any longer. Genetic testing of dams and sires allows breeders to make informed decisions about which dogs to breed together in order to prevent puppies from being born with these conditions. In addition, prospective puppy buyers should ask their breeder for records of genetic tests and other health screening performed in their kennel. If no genetic testing or health clearances have been performed, looking for another kennel, requesting that the puppy be tested as a condition of purchase, or offering to pay for the testing yourself, will help you protect the immense financial and emotional commitment that comes with obtaining your new best friend and getting them ready to pursue their love of the hunt.

Skeletal Dysplasia 2: A cause of dwarfism in the Labrador retriever

CleverPet: Stimulate Your Dog's Mind While You're Away