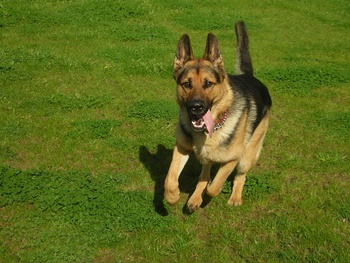 In the world of human genetics, stories related to hereditary cancer predisposition syndromes have recently made quite a splash in the media.  For example, actress Angelina Jolie made a very public decision to have a double mastectomy in order to reduce her breast cancer risk.  There are other popular stories as well.  Although hereditary cancer predisposition syndromes are not as common in the canine population as they are in the human population, knowing a little information about these genetic conditions and how they work may impact breeding practices.

What exactly is a hereditary cancer predisposition syndrome?  Those are a lot of complicated words.  Let’s dissect that phrase:

Predisposition – tendency towards or gravitation to.

Syndrome – a group of symptoms with a single cause.

A hereditary cancer predisposition syndrome gives the affected individual a tendency to develop cancer.  Cancer, for the most part, is multifactorial.  That means there are genetic and environmental influences.  However, hereditary cancer predisposition syndromes have a much greater genetic influence than environmental influence when it comes to the risk of developing cancer.

Hereditary cancer predisposition syndromes are due to a mutation in a gene that suppresses tumor growth.  When that gene is working properly, it is preventing cancer cells from developing and growing.  There are many tumor suppressor genes.  As stated in previous articles, in general, we have two copies of our genes.  If one copy of the tumor suppressor gene has an inherited mutation, it will not be able to perform its job of restricting cancer growth as well as it should.  Remember, this mutation is congenital (present at birth) and inherited from the mother or father.  This mutation can be passed to future generations (hereditary).  Depending on the gene or mutation, genetic testing may be available.  At some point, there may be an environmental influence (or series of influences) that causes a mutation in the other copy of the tumor suppressor gene, making it even more difficult to limit cancer development.  These environmental influences may also cause mutations in other tumor suppressor genes.  Incidentally, these second mutations caused by environmental influences are NOT inherited through the bloodline, although they still greatly impact cancer risk.

The more tumor suppressor genes that are not working, the higher the risk cancer will eventually begin to develop.  The cancer may not be detectable at first, because it starts with a single cell.  With each generation of cells reproducing, the cancer may develop into a tumor and may spread to other areas of the body (also called metastatic).

An example of a canine hereditary cancer predisposition syndrome is renal cystadenocarcinoma and nodular dermatofibrosis, which is found in German shepherd dogs. It predisposes the dog to renal (kidney) cancer.  This condition is a combination of abnormal growth in the kidneys and the skin. Affected dogs usually present with firm bumps or lumps under the surface of the skin, more commonly located on the limbs and head. Signs of kidney problems can include increase in water consumption, increased urination, depression and weight loss. Extra fibrous tissue on the kidneys may cause them to become enlarged and abnormally shaped. The kidneys may become so large that the affected dog’s abdomen may become distended. The disease typically presents over the age of five.

Genetic testing of the BHD gene in German shepherd dogs will determine whether a dog is affected with renal cystadenocarcinoma and nodular dermatofibrosis. Reliable genetic testing is important for determining breeding practices, especially in this later-onset disease. Breeding of affected dogs is not recommended. German shepherd dogs that are not found to have the condition have no increased risk of having affected pups.

Although there are not many tests available for cancer predispositions in canines, this specific sub-specialty of canine genetic testing will only increase with time.  This is especially true as knowledge of these diseases expands with veterinary research.

Breed of the Week: The Doberman