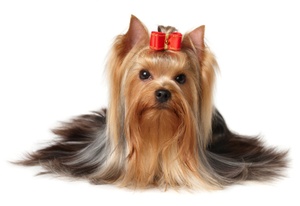 The adorable Yorkshire terrier has become an important fixture in American households since its introduction to the United States in the late 19th century. Originally bred in Scotland and going by the name “Scotch terrier”, the Yorkshire terrier was given its modern name after great improvements in the breed were made in the county of Yorkshire in northern England.

Like most dog breeds, the Yorkie has developed some inherited diseases on its path to the modern breed. The genetic mutations responsible for some better known, inherited diseases of Yorkies such as primary lens luxation (PLL) and a form of progressive retinal atrophy known as progressive rod-cone degeneration (PRA-prcd) have been identified. The identification of these mutations has made it possible for Yorkie breeders to test their dams and sires prior to breeding and to use informed selective breeding practices to prevent the birth of puppies with these conditions. While most Yorkie breeders are familiar with PLL and PRA-prcd in the breed, another inherited condition known as degenerative myelopathy (DM) is less well known by Yorkie breeders. However, DM may be a concern worth investigating further in the Yorkie as the associated mutation has been identified in the breed.

Continue Reading 2 comments
Tweet
by Casey Carl on April 20, 2015 in Ask The Vet 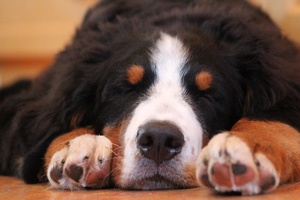 From their roots as a well-rounded Swiss farm dog, the modern Bernese mountain dog (BMD) is well known for its friendly and affectionate demeanor. This intelligent and adaptable breed has gained the love of many Americans since its introduction to the United States in 1926. In 2014 the BMD moved to 31st place in the AKC registration statistics and appears to be growing in popularity as the breed has moved up 8 places in the rankings since 2009.

Like many purebred dogs, the Bernese mountain dog is known to inherit some health issues that are of major concern to breeders. Unfortunately, genetic discoveries for some of the most concerning inherited issues for BMD breeders, such as a type of cancer known as histiocytic sarcoma, have remained elusive. However, some inherited diseases of Bernese mountain dogs can be avoided through the use of genetic testing technologies and selective breeding practices.

The late-onset neurological disease, degenerative myelopathy (DM) is one such disease that can be prevented through genetic testing. In 2009, a mutation in the canine SOD1 gene was described as a major cause of DM. Since then, the mutation has been reported in over 100 dog breeds including ...

Continue Reading 0 comments
Tweet
by Casey Carl on April 15, 2015 in Ask The Vet 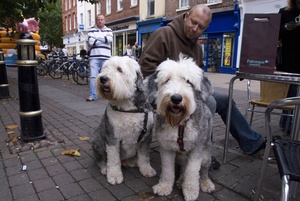 Diseases with a late ...