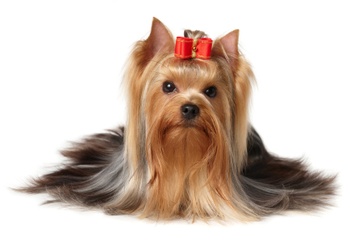 The adorable Yorkshire terrier has become an important fixture in American households since its introduction to the United States in the late 19th century. Originally bred in Scotland and going by the name “Scotch terrier”, the Yorkshire terrier was given its modern name after great improvements in the breed were made in the county of Yorkshire in northern England.

Like most dog breeds, the Yorkie has developed some inherited diseases on its path to the modern breed. The genetic mutations responsible for some better known, inherited diseases of Yorkies such as primary lens luxation (PLL) and a form of progressive retinal atrophy known as progressive rod-cone degeneration (PRA-prcd) have been identified. The identification of these mutations has made it possible for Yorkie breeders to test their dams and sires prior to breeding and to use informed selective breeding practices to prevent the birth of puppies with these conditions. While most Yorkie breeders are familiar with PLL and PRA-prcd in the breed, another inherited condition known as degenerative myelopathy (DM) is less well known by Yorkie breeders. However, DM may be a concern worth investigating further in the Yorkie as the associated mutation has been identified in the breed.

DM is a late-onset, progressive neurological disease caused by a mutation in the SOD1 gene. The canine equivalent to the human disease known as amyotrophic lateral sclerosis (Lou Gehrig’s disease), affected dogs commonly begin showing clinical signs of disease around 7 to 10 years of age. The first clinical sign often noticed by owners is weakness in the dog’s hind limbs and difficulty rising after lying down. Early in the disease course, dogs will often show characteristic signs of neurological dysfunction such as dragging hind feet while walking (often identified by the sound of toenails scraping on hard surfaces) and abnormal positioning or crossing of hind limbs while standing. Progression of the disease results in an ascending neurological dysfunction which eventually involves the front limbs. Some dogs also suffer urinary or fecal incontinence late in the course of disease. Most dogs are unable to walk within 6 months to 2 years after initial clinical signs begin and are often humanely euthanized due to quality of life concerns.

The SOD1 gene mutation responsible for causing DM is believed to be an ancient mutation, first arising in a predecessor to many of our modern breeds. As our modern dog breeds were developed, this mutation was unknowingly passed along to many blood lines. Since the mutation’s discovery, it has been identified in over 100 breeds of dog, including the Yorkshire terrier.

One publication has described the SOD1 mutation in a single Yorkie and dozens of Yorkies with the mutation have been identified in the Paw Print Genetics laboratory. However, it is not known what percentage of Yorkies develop disease from this mutation or what the average age of onset is for this breed. It should be noted that a direct correlation between the common SOD1 gene mutation and degenerative myelopathy has not been published for the Yorkshire terrier. However, given experience with this mutation in other breeds, it is plausible that at least some Yorkies will develop this condition later in life if they have inherited two copies of the mutation from their parents.

How Is DM Inherited?

DM is inherited in a recessive fashion with incomplete penetrance meaning that dogs must inherit two copies of the associated SOD1 gene mutation (one from each parent) in order to develop disease. However, the phenomenon of incomplete penetrance means that not all dogs inheriting two copies of the mutation will develop disease. Dogs inheriting only a single copy of the mutation are considered carriers of DM and will not develop the disease. However, carriers of the mutation can have affected puppies if bred to another carrier of the same mutation. In order to prevent producing affected dogs, carriers should only be bred to dogs that have not inherited the mutation. As with most genetic diseases, in general, it is not recommended to breed affected dogs.

Without genetic testing, the combination of DM’s incomplete penetrance, late age of onset, and misconceptions about the disease have often made it difficult for breeders to identify carriers and young, affected dogs. The factors that prevent DM from fully manifesting in some dogs are unknown, but likely include a combination of multiple genes and environmental factors.

Paw Print Genetics offers testing of Yorkshire terriers for degenerative myelopathy and 3 other inherited diseases. If you have questions about whether DM could be a concern for your dog or if you have other canine genetic disease questions, please feel free to contact our laboratory at AskUs@pawprintgenetics.com or give us a call at 509-483-5950. Lastly, since there are unanswered questions about DM in the breed, we are very interested in speaking with owners of Yorkshire terriers that have been diagnosed with the disease to discuss age of onset, the rate of progression, and clinical signs seen. If you have owned (or currently own) a Yorkie diagnosed with DM and would be willing to share your story, please contact me directly at ccarl@pawprintgenetics.com. All conversations will be confidential.

Friendship Day and Our Relationship with Dogs