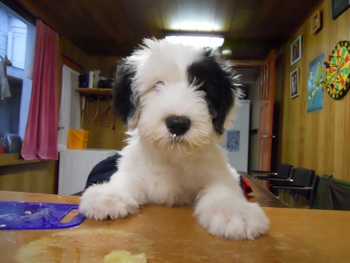 Though their early origins are vague due to a lack of documentation, the old English sheepdog’s (OES) easy going personality and intelligence are no mystery to those close to the breed. Most likely developed in western England in the early 19th century, the OSE was commonly used to help farmers drive livestock to market. Despite its natural instincts and desire to work, a well-exercised, modern OSE is just as content curled up on the couch with their favorite person as they are when working or participating in agility, obedience, or herding trials. Their characteristic thick, shaggy coat and docked tail help make the OES one of the most recognizable dog breeds in existence. However, one thing that can’t be recognized from physical appearance alone is an individual OES’s likelihood to produce puppies with inherited disease. Through the use of genetic testing and selective breeding practices, the incidence of some inherited diseases can be greatly reduced (or even eliminated) from blood lines.

One concern of the OES lover is a disease often associated with the Labrador retriever known as exercise-induced collapse (EIC). EIC is a troubling neuromuscular disorder caused by a mutation in the

DNM1 gene. As its name suggests, EIC manifests most commonly in affected dogs during strenuous exercise, often before the age of 2 years old. After 5 to 20 minutes of sustained activity affected dogs typically show signs of weakness in the hind limbs, wobbling, and an abnormal gait often resulting in collapse. Dogs may drag their hind limbs before fully collapsing. Though dogs typically remain alert and pain free during the episode, they are unable to move for a period of time. Most dogs fully recover within 30 minutes. Unfortunately, some dogs have been reported to develop more severe signs of collapse that include low muscle tone, confusion, loss of consciousness, seizures, and rarely, death. There are no methods to preventatively identify more severely affected dogs or when severe episodes may occur.

Though many people have reported that their dog is more likely to collapse in warmer temperatures, this does not seem to be a critical factor. However, higher humidity and temperature may play a role in collapsing episodes for dogs unaccustomed to a new environment. In addition, higher excitement and stress levels also both seem to contribute to the likelihood of collapse in affected dogs. Affected dogs are believed to be less likely to collapse during swimming, but swimming does not eliminate the risk.

Despite being inherited in a recessive fashion (see “How Are These Diseases Inherited” section below) not all dogs inheriting two copies of the associated mutation will develop signs of EIC. This suggests that other currently unknown genetic or environmental factors may play a role in how the disease presents. In addition, dogs inheriting two copies of the mutation but never showing signs of collapse, can still have severely affected puppies.

Arguably the biggest inherited disease concern for OES breeders, primary ciliary dyskinesia (PCD) is an unusual inherited disease caused by a mutation in the CCDC39 gene and is believed to be unique to the OES. Dogs affected with PCD lack the ability to produce hair-like structures known as cilia which play important roles in the respiratory tract, inner ear, brain, spinal canal, and reproductive tract through wave-like movements that help move various fluids around the body. The most obvious problems in affected dogs occur in the respiratory and reproductive tracts, however behavioral abnormalities and ear infections have also been reported.

In normal dogs, particles inhaled into the respiratory tract become trapped in mucus produced in the airways. The wave-like movements of cilia move these trapped particles either toward the nostrils (where they will be blown out of the body) or toward the mouth (where they will be swallowed and expelled through the GI tract). Since affected dogs cannot effectively clear these particles they are at significantly increased risk of developing respiratory infections including sinusitis, bronchitis, and pneumonia.

A lack of cilia in the reproductive tracts of affected dogs significantly impairs their ability to produce puppies. Affected female dogs lack cilia in the tubes of their reproductive tract which assist sperm in their journey to fertilize the female’s eggs. Affected male dogs are sterile due to an inability to produce the motile tail of sperm cells which are crucial in sperm movement and egg fertilization.

Lastly, about 50% of PCD affected dogs are also born with an unusual condition known as situs inversus, in which the lungs, heart, and abdominal organs develop in a mirror image orientation in the body. However, this abnormal positioning of the organs does not seem to cause clinical problems.

Though PCD affected dogs can live for years if control of chronic respiratory infections is maintained, there is no cure for PCD and treatments can be frequent and expensive over time.

Both of the diseases discussed in this blog are inherited in a recessive fashion meaning that a dog must inherit two copies of the genetic mutation (one from each parent) in order to develop the disease. Dogs inheriting a single copy from one parent are considered carriers. Carriers will not show clinical signs of disease, but can produce affected puppies if bred with another carrier of the same mutation. If you have additional questions about inherited diseases that could affect your dog or general inherited disease related questions, please contact Paw Print Genetics at AskUs@pawprintgenetics.com or call the Paw Print Genetics laboratory at 509-483-5950 (8 am to 5 pm PST; Monday through Friday)