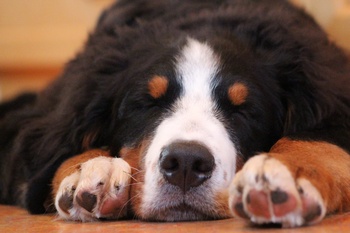 From their roots as a well-rounded Swiss farm dog, the modern Bernese mountain dog (BMD) is well known for its friendly and affectionate demeanor. This intelligent and adaptable breed has gained the love of many Americans since its introduction to the United States in 1926. In 2014 the BMD moved to 31st place in the AKC registration statistics and appears to be growing in popularity as the breed has moved up 8 places in the rankings since 2009.

Like many purebred dogs, the Bernese mountain dog is known to inherit some health issues that are of major concern to breeders. Unfortunately, genetic discoveries for some of the most concerning inherited issues for BMD breeders, such as a type of cancer known as histiocytic sarcoma, have remained elusive. However, some inherited diseases of Bernese mountain dogs can be avoided through the use of genetic testing technologies and selective breeding practices.

The late-onset neurological disease, degenerative myelopathy (DM) is one such disease that can be prevented through genetic testing. In 2009, a mutation in the canine SOD1 gene was described as a major cause of DM. Since then, the mutation has been reported in over 100 dog breeds including the BMD. The fact that the mutation is widespread amongst dog breeds indicates that the mutation is likely of ancient origin and occurred naturally in a predecessor to the modern domestic dog breeds we love today.

Dogs affected with DM typically present between 7 and 10 years of age with weakness in the hind limbs resulting in difficulty rising after lying down. With DM disease progression, dogs may drag their hind feet while walking, develop muscle atrophy, lose their balance easily, display an abnormal gait, and develop urinary or fecal incontinence. The disease gradually leads to neurological dysfunction in the front limbs as well. After initial clinical signs occur, the progression of disease is relatively rapid with most dogs losing the ability to walk within 6 months to 2 years.

In 2011, a case report was published describing a BMD with degenerative myelopathy that did not have the originally described SOD1 mutation. It was found that this dog actually had a mutation in a different location of the same gene that was the likely cause of DM. Therefore, a normal genetic testing result for the original mutation cannot completely exclude DM in the BMD. Paw Print Genetics does not currently offer testing for the second SOD1 gene mutation described in the BMD, but plans are in place to develop a test for the BMD specific DM mutation in the near future. Parties interested in testing their BMD for this second reported mutation can stay informed about genetic test releases by signing up for the monthly Paw Print Genetics newsletter.

Von Willebrand Disease I (VWDI) is another inherited disorder known to affect multiple dog breeds including the BMD. VWDI is a blood clotting disorder reportedly caused by a mutation in the VWF gene. Affected dogs cannot produce adequate amounts of a protein known as von Willebrand factor which plays an important role in the beginning stages of blood clotting. Most dogs inheriting VWDI will have mild to moderate disease resulting in clotting difficulties which may only be identified during traumatic injuries or surgery. However, affected dogs can also suffer from frequent nosebleeds or bleed excessively when losing baby teeth.

Genetic testing for VWDI can help breeders avoid producing affected puppies through selective breeding and can help veterinarians identify affected dogs prior to surgery. Ready access to medications to assist with blood clotting and banked blood products are important considerations for any VWDI affected dog.  Testing information is crucial for the veterinarian to prepare for the potential of severe blood loss.

Both of the diseases discussed in this blog are inherited in a recessive fashion meaning that a dog must inherit two copies of the genetic mutation (one from each parent) in order to develop the disease. Dogs inheriting a single copy from one parent are considered carriers. Carriers will not show clinical signs of disease, but can produce affected puppies if bred with another carrier of the same mutation. If you have additional questions about inherited diseases that could affect your dog or general inherited disease related questions, please contact Paw Print Genetics at AskUs@pawprintgenetics.com or call our laboratory at 509-483-5950 (8 am to 5 pm PST; Monday through Friday).

Mother's Day- Introducing A New Dam to Your Breeding Program