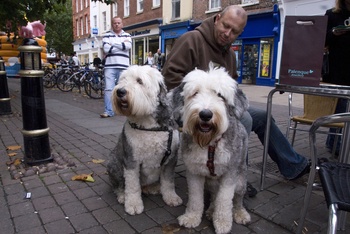 Diseases with a late age of onset like DM pose a significant concern for breeders because both asymptomatic carriers and at-risk dogs (see “How Are These Diseases Inherited” section below) can unknowingly be bred in their early life and produce puppies which will also eventually develop the disease with age. Genetic testing of dams and sires prior to breeding allows for the identification of these carriers or at-risk dogs so that informed selective breeding practices can be employed to prevent creation of affected puppies.

A disorder known to be a major concern for a variety of herding dog breeds, multidrug resistance 1 (MDR1) is a potentially lethal condition only posing a problem when affected dogs are exposed to one of various medications. Dogs inheriting one copy of the associated ABCB1 gene mutation from each parent (see “How Are These Diseases Inherited” section below) are unable to produce p-glycoprotein, a protein important in the transportation of certain toxins and medications out of the central nervous system (CNS). Thus, affected dogs are at risk of develop toxic accumulations of certain medications in the CNS when given normal treatment doses. Affected dogs present with mild to severe neurological clinical signs including tremors, anorexia, excessive salivation, blindness, coma, and even death. Dogs at-risk for adverse drug reactions do not show signs of disease in the absence of these drugs. Therefore, at-risk dogs typically go unnoticed until one of these medications is used to treat a medical ailment.

Historically, anti-parasitic drugs from the drug class known as avermectins (specifically the drug, ivermectin) were associated with neurological disease in at-risk dogs. However, other drugs including the anti-diarrheal medication loperamide, certain pre-anesthetic medications, and a variety of cancer drugs have also been associated with neurological disease in these MDR1 affected dogs. Owners of dog breeds known to inherit MDR1 would be best served to have genetic testing for the mutation performed on their dog for future medical consideration. Though most dogs displaying significant drug-related signs of neurotoxicity are those that have inherited two copies of the mutation (one from each parent), signs have also been reported in dogs inheriting only a single copy. Once dogs have been tested for MDR1, veterinarians should be made aware of all dogs that have inherited either one or two copies of the mutation prior to administration of medications in order to avoid potential neurologic problems.

Both of the diseases discussed in this blog are inherited in a recessive fashion meaning that a dog must inherit two copies of the genetic mutation (one from each parent) in order to develop the disease. Dogs inheriting a single copy from one parent are considered carriers. Carriers will not show clinical signs of disease, but can produce affected puppies if bred with another carrier of the same mutation. If you have additional questions about inherited diseases that could affect your dog or general inherited disease related questions, please contact Paw Print Genetics at AskUs@pawprintgenetics.com or call the Paw Print Genetics laboratory at 509-483-5950 (8 am to 5 pm PST; Monday through Friday).

Preventable Inherited Diseases of the Old English Sheepdog- Part One