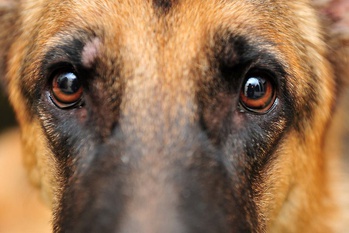 The known underlying mutations associated with the various forms of PRA are found in a wide variety of different genes. Thus, highlighting the complexity of the biological pathways involved in the development and ongoing maintenance of the eyes. PRAs are marked by the abnormal development and/or the gradual degeneration of rod and cone photoreceptor cells of the retina. Each type of PRA may display variation in the age of onset, speed of disease progression, and the relative rates at which each of the two photoreceptor types are destroyed. However, when it comes to clinical eye examinations, the various forms of PRA are nearly indistinguishable as they share common ophthalmologic clinical signs including progressive decrease in retinal blood vessel size, thinning of the retina, increased light reflection (“eye shine”) off of the structure behind the retina known as the tapetum lucidum, and progressive vision loss. However, these clinical signs only become apparent on eye exam as the dog approaches the typical age of onset for a specific type of PRA.

Despite shared clinical signs, variation in age of onset for the different types of PRA is vast (from the first weeks of life to 15 years old). In part, this variation is determined by the type of cellular dysfunction present. Although there are exceptions, in general, early-onset forms of PRA are often the result of genetic mutations in genes responsible for normal photoreceptor cell development and their names often include the word ‘dysplasia’ to indicate abnormal development (e.g. progressive retinal atrophy, rod-cone dysplasia 2). However, late-onset forms of PRA are generally the result of mutations in genes responsible for the maintenance of mature photoceptor cells and their names often include the word ‘dystrophy’ to indicate degeneration of normally developed cells (e.g. progressive retinal atrophy, cone-rod dystrophy 4) . In either case, degeneration of rods and cones, and subsequent blindness, are the unfortunate end points.

When it comes to the names associated with the various types of PRA, things get a little tricky. Over the years, the lack of a universally accepted naming scheme for PRA, has led to some confusion among those trying to identify which particular PRA test should be performed for a specific dog.

In general, the PRAs are named for the relative severity of degeneration for each photoreceptor cell type over time. For example, some PRAs have a name that starts with ‘rod-cone’ indicating that the rod photoreceptors are more significantly affected in the early stages of disease. Since rod cells play an important role in low light vision, dogs with primarily rod cell destruction often present with night blindness. In contrast, PRA names starting with ‘cone-rod’ tend to result in preferential destruction of cone photoreceptor cells in early stages of disease. Since cone cells are important for vison in moderate to bright light, dogs with primarily cone cell destruction often present with normal night vision, but impaired vision in brighter environments. However, for most types of PRA, in the end both types of photoreceptor cells are eventually affected, leading to blindness.

Since there are not any commercially-available treatments for PRA currently available, preventing PRA through the genetic testing of breeding dogs and the implementation of informed selective breeding practices remain the best options to prevent PRA-associated blindness. However, the specific inheritance type of a particular PRA may change the way genetic testing results are used to alter breeding practices.

At Paw Print Genetics (PPG), we have a handy website search tool that allows you to search for disease testing by breed. In breeds with only a single type of PRA test, this tool makes it easy to find the correct test. However, when breeds have multiple types of PRA testing available or when the name of the PRA type you are looking for is similar to another type of PRA, there are a couple of things to keep in mind to make finding the right test easier. First, knowing whether the PRA test you are looking for is of the ‘rod-cone’ or ‘cone-rod’ type can be helpful. For example, at PPG we offer testing for two forms of PRA with very similar names but very different affected breeds: progressive retinal atrophy, cone-rod dystrophy 4 and progressive retinal atrophy, rod-cone dysplasia 4. To make it even trickier, it is a very common practice to write PRA names as acronyms; in this case, ‘PRA-crd4’ and ‘PRA-rcd4’. As you can see, it can be pretty easy to mistake one acronym for the other on a quick glance. However, if you notice which photoreceptor cell is listed first in the name, the inheritance type, the breeds affected, and whether the specific PRA type is considered ‘dysplasia’ (abnormal development) or ‘dystrophy’ (degeneration of normally developed cells), you shouldn’t have too much trouble finding the test you need.

Paw Print Genetics currently offers testing for a wide variety of inherited canine eye diseases among our list of over 250 genetic tests associated with inherited diseases and traits. In addition to writing the first quality standards and guidelines for canine clinical genetic testing, PPG is widely regarded for exemplary customer care and genetic counseling services. If you have questions about which PRA test to choose or how PPG can assist you in your veterinary practice, please feel free to contact us at AskUs@pawprintgenetics.com or give us a call 509-483-5950 (Mon. to Fri., 8 am to 5 pm Pacific time) to receive a personal consult with one of our veterinarians or geneticists.

A Tribute to Trixie the Wiener Dog