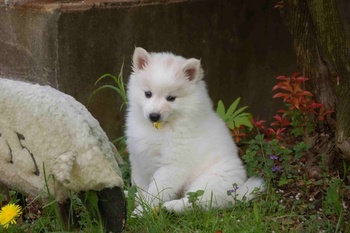 Despite its name, the roots of the American Eskimo dog can be traced back to Germany where it was known as a white colored, miniature to medium sized variety of the German spitz. This well rounded farm dog came to the United States with German immigrants in the early 20th century and adopted the name American spitz in the World War I era when war related anti-German sentiment and American patriotism were widespread. The breed was first recognized as the American Eskimo dog (AED) by the United Kennel Club in 1919 and was accepted by the American Kennel Club for registration in 1995. Known for its alert demeanor, the AED makes an excellent watchdog that alarms its family of potential danger through warning barks. The AEDs intelligence, fast learning, and desire to please have made it a competitor in the agility ring and obedience trials. Though not universally recognized as three separate varieties, the modern AED is often split into three size groups (toy, miniature, and standard).

Despite its many talents, beautiful physical characteristics, and intelligence, like other pure breeds, the AED has developed some inherited disease concerns over the course of its development that have caused significant issues in some blood lines. Luckily for modern breeders, some of these inherited diseases can now be eliminated from blood lines through the use of genetic testing technologies and informed selective breeding practices to prevent the production of affected puppies. By testing dams and sires prior to breeding and using this information to their advantage, breeders can improve the quality and quantity of life for their dogs and prevent unnecessary suffering from disease. One particular inherited disease concern of AED breeders is a relatively common eye disease known as progressive retinal atrophy, progressive rod-cone degeneration (PRA-prcd).

PRA-prcd is a member of a general group of eye diseases known as the progressive retinal atrophies (PRAs). More than a dozen types of PRA, each caused by different mutations in multiple genes, have been described in dogs. Though similar in the clinical features associated with retinal degeneration, the age of onset, speed of progression, and mode of inheritance vary depending on the specific type of PRA.

PRA-prcd is a late-onset form of PRA that has been recognized in over 30 breeds of dog and is caused by a genetic mutation in the PRCD gene. Affected dogs typically begin showing signs of night blindness and peripheral vision loss around 3 to 5 years of age (some dogs may present later) as the cells of the retina responsible for vision in low light (rod cells) degenerate. Over time, the disease progresses to include degeneration of cells responsible for vision in normal light (cone cells) resulting in complete blindness.

PRA-prcd is inherited in a recessive fashion meaning that dogs must inherit two copies of the associated PRCD gene mutation (one from each parent) in order develop disease. Dogs inheriting one copy of the mutation from a single parent are considered carriers of the disease and will not show signs of the disease themselves. However, carriers can have affected puppies if bred with another carrier of the same genetic mutation. In order to avoid producing affected dogs, carriers should only be bred to dogs that have not inherited a copy of the mutation (“clear” dogs). As with most inherited diseases, in general, it is not recommended to breed affected/at-risk dogs which have inherited two copies of the mutation.

Paw Print Genetics offers testing for progressive retinal atrophy, progressive rod-cone degeneration and three other inherited diseases of concern in the AED. If you have questions about how to eliminate these inherited diseases from your kennel or have other general canine genetics questions, please contact us at AskUs@pawprintgenetics.com or call our laboratory at 509-483-5950 (Mon.-Fri.; 8 am to 5 pm) to speak with one of our knowledgeable geneticists or veterinarians.

Prevention is Smart Breeding- Ichthyosis and the Norfolk Terrier