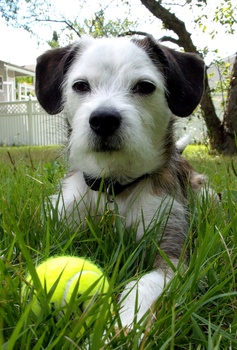 Previously known as the Jack Russell terrier, the Parson Russell terrier’s nearly 200 year long history began in the 1800’s when Parson John Russell of England obtained a terrier named Scout with the purpose of training him for European red fox hunting. Russell eventually developed a particularly adept line of terriers meant to run alongside hunters on horseback and dispatch foxes.

These diseases include two types of inherited neurological disease resulting in loss of motor control (spinocerebellar ataxia and late-onset ataxia) as well as an inherited eye disease known as primary lens luxation.

SCA (sometimes referred to as spinocerebellar ataxia with myokymia and seizures) is a severe neurological condition which typically presents between 2 to 6 months of age and is caused by a genetic mutation in the KCNJ10 gene. Affected dogs first show signs of incoordination, an abnormal “prancing” gait, and loss of balance which often progresses to include severe muscle twitching episodes resembling seizures (known as myokymia). In contrast to the loss of consciousness seen in seizure activity, dogs experiencing myokymia remain alert and aware during attacks which can last for up to several hours. However, they are at risk of overheating due to elevations in body temperature which accompany muscle twitching. Unfortunately, some SCA affected dogs also exhibit true epileptic seizures in addition to, or instead of, myokymia. Most dogs affected with SCA are euthanized by 2 years of age due to progression of disease and poor quality of life.

While also technically a “spinocerebellar ataxia” based upon the changes found in the central nervous system, LOA is so named to differentiate it from the earlier onset SCA reportedly caused by the KCNJ10 gene mutation described above. Dogs affected with LOA (caused by a genetic mutation in the CAPN1 gene) typically present around 6 to 12 months of age with clinical signs which closely resemble those seen in SCA including the presence of an abnormal gait, incoordination, and loss of balance. However, dogs affected with LOA are not reported to display the severe muscle twitching or seizures seen with SCA. Like SCA, LOA progresses until affected dogs have difficulty walking or performing tasks such as climbing stairs and are often euthanized within 2 years of the first clinical signs.

Primary lens luxation caused by a mutation in the ADAMTS17 gene is an inherited eye disease identified in numerous breeds including the three Russell terrier breeds. Affected dogs are prone to dislocation of the lens in the eye due to breakage of ligaments responsible for holding the lens in place. Dislocation of the lens in the forward direction is most common and more serious than in the reverse direction due a risk of secondary glaucoma and the related potential for damage to the optic nerve. Lenses dislocating in the forward direction should be addressed immediately in order to protect vision. In either case, surgery to remove the dislocated lens and replacement with an artificial one is the only option to restore full vision. However, depending on the severity of damage to the eye, some dogs are poor candidates for lens replacement. In addition, not all veterinary ophthalmologists perform the lens replacement procedure. Lenses dislocating in the reverse direction do not tend to cause problems and are often only monitored for complication due to increased surgical risks and the demanding technical ability required for removal of a lens from the rear portion of the eye. Dogs undergoing lens removal without replacement still retain vision, but are unable to focus on objects near to them.

Both SCA and LOA are inherited in a recessive fashion meaning that dogs must inherit two copies of the associated mutation (one from each parent) in order to develop clinical signs of the disease. Dogs inheriting a single copy of either associated mutation are considered carriers of that particular disorder and do not show clinical signs of disease. However, about 25% of puppies produced from a breeding between two carriers of the same mutation will be born with two copies of the mutation and therefore, will be affected with the disease as they age. Carriers can be bred to dogs that are free of the mutation ("clear") without fear of producing affected puppies. However, about 50% of these puppies will inherit one copy of the mutation and be carriers of the disease.

The inheritance of primary lens luxation is slightly different than that of SCA and LOA. Though dogs inheriting two copies of the mutation are most likely to develop lens dislocation, dogs inheriting a single copy also have a lower, but increased risk of disease. Therefore, breeders attempting to eliminate ALL risk associated with this mutation, would be advised to only breed dogs that have not inherited a copy from their parents.