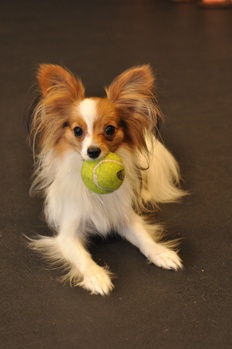 With their picturesque appeal, predecessors of the modern day papillon (known as continental toy or Titian spaniels) were popular subjects for European painters between the 16th and 18th centuries. The popularity of these small spaniels with European aristocrats and royalty of the Renaissance period, led to their appearance in many paintings from the era. The iconic, longhaired “butterfly-like” ears, for which papillons are named, are obvious in these paintings though many of the portrayed dogs were of the drop-eared variety of the breed that today is known as the phalène. According to an article on the Papillon Club of America website, in the late 19th century erect ears became a more desirable trait with papillon fanciers and eventually the erect-eared variety obtained their current position as the more popular form of the breed. In addition to their beautiful physical attributes, in their modern form, well-socialized papillons are described as happy, playful and affectionate family members. Papillons are also often described as frequent barkers, making them great guard dogs. Despite their adorable personalities and good temperament, like other purebred dogs, the papillon is known to inherit some genetic diseases that could prevent this regal breed from reaching the throne room. One such inherited disorder unique to papillons and phalenes is an eye disease known as progressive retinal atrophy, PRA1 (PRA1).

Progressive retinal atrophy (PRA) is a general term for a common group of inherited eye diseases sharing similar clinical signs, but caused by different genetic mutations in multiple genes. Though the age of onset and progression of each type of PRA differs, most types of PRA eventually lead to complete blindness in affected dogs due to degeneration or abnormal development of the retina; specifically, cells of the retina known as rod and cone cells which play a crucial role in vision. PRA1 is a late-onset variety of PRA caused by a genetic mutation in the CNGB1 gene that has only been reported in papillons and phalènes. Dogs affected with PRA1 tend to show clinical signs of poor vision in low light conditions beginning around 4 to 6 years of age. This correlates with researchers’ findings that rod cells degenerate first in PRA1, as these cells are responsible for vision in low light conditions. With time, dogs will eventually suffer degeneration of cone cells as well (responsible for vision in day light conditions) and complete blindness often results. However, PRA1 has a variable age of onset and progression in which some affected dogs never develop complete blindness. In addition, some owners may not realize their dog has impaired vision until late in the disease process when cone cells begin to degenerate, even though their dogs may have significant degeneration of rod cells (and night blindness).

Though there is no cure for PRA1, the discovery of the associated CNGB1 gene mutation has made it possible to prevent and eliminate PRA1 from breeding programs. PRA1 is a recessive genetic disease meaning that dogs must inherit two copies of the mutation (one from each parent) in order to develop disease. Dogs only inheriting one copy of the mutation are considered carriers of PRA1 and will not show signs of disease, but can have affected puppies if bred with another carrier of the mutation. These non-symptomatic carriers make genetic testing of any breeding dog crucial in disease management. Breeding of carrier dogs should not be discouraged but should be bred with dogs that have not inherited the mutation (“clear dogs”) in order to prevent producing affected puppies. However, approximately 50% of the puppies from this match would also be carriers. As with any inherited disease, breeding of affected dogs is not recommended.

In one study, 17.2% of 145 randomly selected papillons and phalènes from Finland were found to be carriers of the mutation associated with PRA1. In addition, another study found that only 13 out of 20 papillons diagnosed with progressive retinal atrophy had inherited the PRA1 mutation. This suggests that there is at least one other unknown genetic mutation responsible for causing progressive retinal atrophy in this breed.

Paw Print Genetics offers genetic testing for progressive retinal atrophy, PRA1 as well as a test for the clotting disorder von Willebrand disease I in the papillon and phalène. If you have questions about your royal papillon’s genetic health or would like to discuss PRA1 and what it means to your breeding program, feel free to contact Paw Print Genetics at AskUs@pawprintgenetics.com or call our knowledgeable laboratory staff at 509-483-5950.