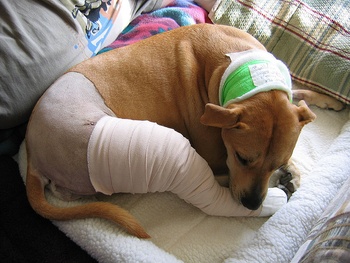 Now, that might sound harsh to those of us who pull our dog out of the box and get in line for competition, but the truth is: he’s right. Would an elite human athlete get out of bed and immediately strap on the skis, run a marathon or get on the court of competition without so much as stretching? Would you get off the couch and undergo physical exercise without any preparation?

Why in the world should we ask our dogs to do it? It’s incumbent upon us as owners, trainers and competitors to feed, train and care for our dogs to the best of our ability. That includes warming them up before competition.

“If all you can do is big figure-eights on an incline or hillside before, it’s the biggest, best thing you can do,” said Cook.

Cook also recommends active stretching, which incorporates the dog doing something to move its muscles, such as standing on its back feet and “dancing” with you (versus passive stretching that features a dog laying down and a human stretching the muscles of its limbs by flexing and extending them). Hill climbing, sit-to-stands and other core-strengthening exercises help to stretch and warm a dog up for competition.

Warming a dog up can help prevent CCL damage, which has been on the rise for several decades. The reason for this increase is somewhat unknown. Scientists are exploring genetic links, conformation differences in lines, possible bacteria in the ligament sheath and more. However, there are undeniable steps you can take to help reduce the chance of CCL damage, and that’s to not only warm your dog up prior to exercise, but to keep it lean and muscular.

“Over the last four decades, hip dysplasia has increased slightly but not much. CCL damage however has skyrocketed,” said Cook, attributing part, but not all, of the increase to better healthcare and diagnosis. He said the biggest factor is something wholly controlled by owners, that being feeding rations and weight management. “The trend of obesity in dogs almost perfectly matches the increased trend of CCL tears in this country over the last forty years.”

Keeping your dog lean will greatly reduce its chance of injuring a CCL, and a dog with good muscular development can recover from an injury faster – and, with good muscle support, can actually get along quite well without the CCL.

The message is clear: warm your dog up prior to competition/extreme exercise and keep them lean and in shape to help avoid tearing a CCL – which could cost you several thousand dollars to repair.

Why is my dog so itchy? Part 4: Fleas and Ticks