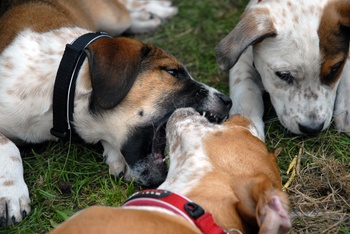 According to recommendations from the American Veterinary Society of Animal Behavior, if your dog has had its first vaccinations, get them out into the world to explore and meet new friends. Prior to their first round of shots, and even afterward, maternal antibodies help protect your new pup from diseases. When those maternal antibodies begin to wear off and the pup’s immune system must fight its own battles is variable, which is why vets begin giving immunizations early and continue to stage them over weeks and months. The continuous protection through the likely transition period will create overlap and protect your dog. That means you can begin socializing your puppy soon after you get it home – which will help create a more confident and stable grown dog.

Regardless of whether you’re taking your pup out into the world before its first immunizations (and while it still relies on mom’s antibodies) or after, there are a few precautions to keep in mind:

Avoid dog parks: A concentration of wild or domestic animals in a small area is almost always a recipe for disaster. Diseases and viruses run rampant with close contact, fecal and urinary waste hold their own unseen dangers and behavior issues with some dogs could leave a lasting impression on puppy. Just stay away until your puppy is older – and perhaps don’t go then; a hike in the woods or obedience training will go further than mindless romping.

Avoid other high-usage areas: Take caution when letting your pup explore at the veterinarian’s office; after all, many of the dog’s going there are sick! Highway rest stops are another area where unknown dogs congregate and leave behind potential illness- and disease-causing waste. Pet stores are also places where unknown dogs frequent. Just stay away until your dog receives its last round of vaccinations.

Known dogs are okay! Introducing your pup to other dogs is critical. As long as the other dog is stable and tolerates puppies (some don’t), and you know that it is current on all its shots and is healthy, then introduce them. Your pup must continue to learn how to communicate and interact with other dogs. It learned some of the language from its mother and littermates but it must continue to learn and use the rituals all canines employ – greetings, warnings, play and submission, as well as other body languages. Deprived of this education, a puppy stands a good chance of facing social ineptness for the rest of its life – which will often result in either the dog withdrawing from other animals or compensating by becoming overly aggressive.

Get them out! Taking care with the introduction to other dogs and areas frequented by lots of dogs, getting your puppy out to experience the world is perhaps the most important training step you can take. Take them for walks where they will experience lots of people, traffic and other sounds (sitting outside a grocery store is perfect for this) and then head into the woods to for some off-leash action. Let your pup explore, but keep quiet and go about your business with one eye on them. When they come running to check in, get down low with them and reward your pup with loves and treats – the positive association is that good things happen when they’re with you; building a bond and laying the foundation for future training.

Socialization at a young age is important to raising a confident and well-balanced adult dog. It can be done safely with just a few precautions, and is totally worth the time and effort.