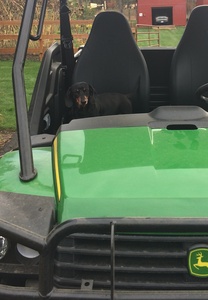 We train our dogs to do certain things, like sit, stay, lay down, retrieve or even run through an agility course. Training a dog takes patience and persistence. It means providing consistent clues that your dog will eventually come to understand if done in the same manner. But I’ve recently come to wonder, have I trained my dog, or has she trained me?

Every time we sit down to eat dinner, our dog Daisy runs to the front door, whips around and stares at us. Invariably, one of us says, “Daisy needs to go out” and my daughter groans, gets up and lets her out.   Most of the time, Daisy does her business, but sometimes, she runs out to the middle of the yard, expecting my daughter to follow her and hopefully play.  This has led us to believe that Daisy’s behavior of running to the door and then staring us down, has trained us to respond in a particular way, and has us wondering if she brags to the other dogs that she has trained her human to stand up and open the door on command.

Likewise, Trixie the Wiener Dog has my husband trained to take ...

Continue Reading 0 comments
Tweet
by Brian Lynn on Aug. 19, 2014 in All Things Dog 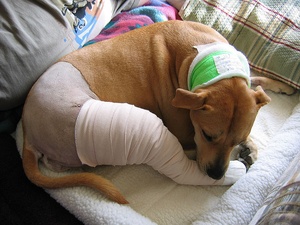 Continue Reading 0 comments
Tweet
by Brian Lynn on Jan. 27, 2014 in All Things Dog 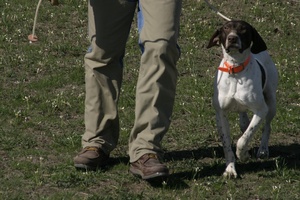 You can run drills all day long, day after day, and you will produce a hunting, obedience, agility or whatever other kind of dog you're interested in producing. It's not until you understand why you're running them and what effect they, and any subsequent corrections or praise, have on your dog that you start to really become a trainer. Plugging along from Point A to Point B and beyond will build a foundation for your hunting dog. It's vitally important that your dog have that foundation to build upon, and it's also one of the biggest problems amateurs have with training.

We get excited to "get to the fun stuff" and skip all the small steps that teach a dog to correctly carry out that fun stuff. When someone says their dog doesn't do something correctly or only does X, Y or Z incorrectly, you can almost always bet that the issue was caused by glossing over or altogether skipping a step in their foundation.

However, just plugging along and running drills, exercises, obedience and applying praise, corrections and the like in a more or less ordered sense isn't what it's all about ...

Continue Reading 0 comments
Tweet
by Brian Lynn on Jan. 13, 2014 in All Things Dog

Back in my younger days I enjoyed skiing. A day on the mountain was filled with fresh, cold air and adrenaline rushes as my buddies and I pushed each other to do better. I used the mantra (sometimes it doubled as an excuse): "if you're not falling, you're not skiing hard enough."

The same might be said of training your dog: if you're not making adjustments, corrections or changes to your dog's performance, you might not be training hard enough. You might just be practicing. Now, I say might because with dogs it's very subjective and depends upon what you've already done with the dog.

If you haven't taught the dog what you expect and then suddenly throw him into a scenario that he has to figure out by trial and error, then corrections, be them verbal, physical or via e-collar, are woefully unfair.

However, if you've gone through the teaching phase, the dog understands what you're doing and what's expected, then pushing him to do better by challenging him mentally and giving him every opportunity to make the correct decisions is training the dog.

If you're simply running ...

Continue Reading 0 comments
Tweet
by Brian Lynn on Sept. 9, 2013 in All Things Dog

In recognition of the AKC’s Responsible Dog Ownership Days, I thought I’d reflect on what it means to be a responsible dog owner, as it’s a very subjective topic.

Some people believe simply providing food, water and shelter is the only responsibility of owning a dog. I’d say that’s the bottom line, lowest common denominator of responsible dog ownership. Below are some thoughts on what it means to responsibly care for, train and breed dogs. Which do you think are most important?

The Basics: As said, providing your dog with quality diet, water and shelter from heat/cold/precipitation are the bare minimums of responsibility. I’d add sufficient exercise and interaction to that list as well.

Socialization: Raising a puppy that has had proper socialization during the first 12 weeks of age will make a difference in its character and psychological stability for the rest of its life. Safely introducing your puppy and allowing it to meet and interact with other dogs teaches it how to behave around other dogs, and what the proper protocols and canine rituals are. Failure to socialize your dog can handicap it; creating a fearful or aggressive dog that will have difficulty interacting with other ...

Degenerative myelopathy (DM) can be a devastating disease. Some breeds with this disease will lose the ability to walk in their later years – certainly after the age most dogs are bred. The mutation has been found in more than 70 breeds, which indicates that the original mutation might have occurred hundreds or thousands of years before many of the modern dog breeds emerged.

However, the frequency of the mutation varies between breeds and certainly the risk of developing the clinical disease seems quite distinct and breed-specific. For example, the frequency of carriers and homozygous mutation (affected) dogs in the Kerry blue terrier is about 52%(1), while carriers and affected dogs make up 91% of Pembroke Welsh corgis in Japan (2). Although wire fox terriers have a similar combined carrier and at-risk frequency of 90%, none have ever developed the clinical signs of DM (3). 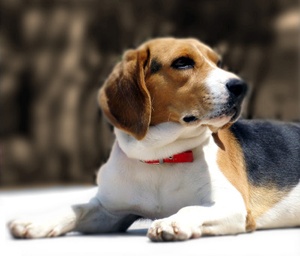