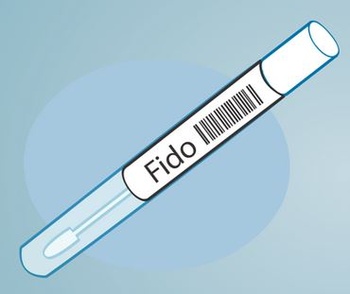 Since we opened Paw Print Genetics in April of 2013, we have had the opportunity to work with many breeders and other dog owners who already had previous experience with genetic testing of their dogs. Though the vast majority of these clients have praised us for our ease of ordering, unrivaled customer service, and quick test results, some clients have expressed some confusion in regards to why (or how) we use cheek swabs as our default method of DNA collection opposed to other methods that they were already familiar with.

When making choices about how Paw Print Genetics would operate, we decided we wanted to eliminate as many barriers to canine inherited disease testing as possible. Not only did we want to make testing more convenient by offering as many disease tests as possible under one roof, we also wanted to make the experience of DNA collection easy and more convenient. To accomplish this, we chose to allow our clients to collect DNA in their own home or kennel with cheek swabs we provide (at no additional cost) after an order is placed. This decision eliminates the time, effort, and expense our clients had previously had to endure in order to either obtain their own swabs or to get blood drawn by a veterinarian.

How can the same genetic tests be performed with different sample types?

The bodies of dogs and other mammals consist of trillions of individual microscopic units known as cells that function in concert to carry out the processes we associate with living organisms. Deoxyribonucleic acid, or DNA, is the molecule inside cells that contain the biological blueprints responsible for the unique differences seen between species and between individuals of the same species. Stretched end to end, the DNA in each cell is about 5 meters in length. In order for this large quantity of DNA to fit inside each cell, DNA is arranged in tightly compacted structures known as chromosomes which reside inside a membrane enclosed structure known as the cell nucleus. Dogs have a total of 39 pairs of chromosomes; one chromosome of each pair is inherited from either the dam or the sire in a random fashion during reproduction.

Particular stretches of DNA, known as genes (there are about 19,000 genes in a dog), function as biologic instructions for creation of specific proteins important in the structure, development, and biochemical reactions of an organism. Alterations of these genes, known as mutations, are mistakes in the genetic code that can occur naturally during DNA replication associated with cell division. These mistakes cause genetic diseases when a cell attempts to produce proteins from these faulty blueprints resulting in mutated proteins. Unfortunately, these mistakes are also passed on to offspring during reproduction, making it important to genetically test dams and sires prior to breeding.

Though cells of the body differ in their function and overall appearance, nearly all cells in the body share identical copies of an individual’s DNA. Differences between cell types of the body are due to an organism’s ability to turn different genes on and off in a cell; turning a gene on means that the gene becomes available to use as a blueprint to create a protein. For example, a different set of genes would need to be turned on in order for a cell to develop into a liver cell opposed to a skin cell. Given that each cell has an identical copy of DNA, genetic test results are identical regardless of the sample type used because genes do not need to be turned on in order for their mutations to be identified on a genetic test.

So, at its core, the decision to use cheek swabs as our default method of DNA collection was another way for Paw Print Genetics to put our customers first by eliminating some historical inconveniences of canine genetic disease testing. It is important to recognize however, that our choice to use cheek swabs in no way prevents our customers from using other sources of DNA if they prefer. We are happy to also except blood (in EDTA anticoagulant), dried docked tails or dewclaws, semen, and/or swabs from other sources as long as they meet our requirements. Any questions in regard to what samples our laboratory accepts and how to appropriately ship samples can be answered on our website, via email (AskUs@pawprintgenetics.com), or with a quick call to chat with a real person at our laboratory (509-483-5950). As a dog breeder or a prospective puppy buyer, you already have plenty to worry about. Let Paw Print Genetics make breeding or buying healthy dogs a little easier by offering our convenient solutions to the formerly inconvenient task of canine inherited disease testing.

The Importance of Testing for Adult-Onset Conditions in Your Dog