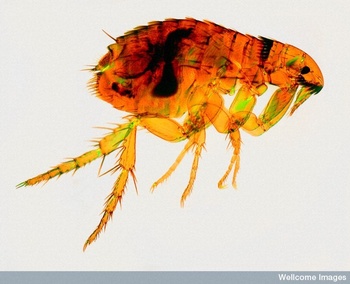 Click for Part 1, Part 2, and Part 3 of this ongoing blog about itchy dogs.

In part 3 of this series of blogs about itchy dogs, we took a look at two common parasites of dogs; lice and mites. In this fourth and final part of these blogs we will discuss fleas and ticks, two other common parasites that can make our dogs’ lives miserable at times.

Though there are multiple species of fleas that can infest our dogs, the most common flea type in North America is the “cat flea”, known to scientists by the name Ctenocephalides felis. Fleas are commonly acquired by our dogs through close contact with other infested animals or from environments suitable for flea development and dormancy. Regions with higher environmental temperatures and high relative humidity allow fleas to develop more quickly and to survive for extended periods of time off of a host. Once infested, there are two important pieces of information that should be considered to eliminate fleas and prevent a reinfestation of your dog; flea control on the host and flea control in the environment.

Since female fleas must take a blood meal before they can lay eggs, controlling the fleas at the level of the host is arguably the most important component of flea control. Today, this control is best attained by the usage of topical or oral, once-monthly flea prevention medications. Though variable in their mechanism of action, these medications tend to work upon the same premise in the dog to kill fleas; after the dog is treated, the medication distributes throughout the dog’s body where it will be consumed by the flea during a blood meal bringing about fleas’ quick demise.

The second piece of information that is important to consider is that immature stages of fleas can live up to a year in your home! When stimulated by vibration and/or carbon dioxide (from our dog’s breath) these immature fleas can become active and reinfest a dog that was treated up to a year before. Therefore, washing all dog bedding and vacuuming all carpets are important considerations to remove these larval and pupal stages. In addition, this also means that you should keep ALL animals in the home on a monthly flea preventative for at least 12 months after infestation in order to prevent reinfestation. In my experience, discontinuing monthly prevention or forgetting to give a monthly dose on schedule are the top reasons that dog owners have recurring issues with fleas.

Aside from the expected amount of itchiness from having insects crawling on them, some dogs also have severe allergies to flea saliva that can turn their simple flea infestation to a dermatologic nightmare (flea allergy dermatitis). In addition to the severe inflammation, hair loss, and itchiness flea allergic dogs develop, they often will develop secondary bacterial skin infections from the allergic reaction combined with self-trauma incurred in their attempt to stop the itch. In these cases, veterinarians often use oral or topical corticosteroids in combination with antibiotics to provide relief. Aside from allergic reactions to fleas, fleas are also known to transmit multiple blood-borne diseases (though less frequently than ticks; see below) and tapeworms.

If you are like many dog owners that have had the distinct pleasure of finding and removing a tick from their dog, you may believe that you have suffered more in mental anguish than your dog would ever suffer from the tick’s bite. Though not a significant cause of itchiness in dogs (unless they have been bit numerous times or they are allergic to ticks), these often despised eight-legged blood suckers can be particularly troublesome in regards to their ability to transmit serious blood borne diseases. Lyme disease, Rocky Mountain spotted fever, and ehrlichiosis are just three of several infectious diseases that are frequently transmitted to dogs (and people) by ticks in the US. However, not all species of ticks transmit the same diseases and the risk of these diseases is associated with the specific tick species living in your region.

Luckily for those that have been bitten, it is generally believed that ticks must stay attached to their host for at least 24 hours to transmit most diseases. This time period between initial bite and disease transmission allows for a thorough check of your dog (and yourself) after exposure to areas frequently inhabited by ticks such as wooded areas, tall grass, and other wild vegetation. It is particularly important to look under your dogs’ legs and tail areas where ticks can remain hidden. A brush or flea comb can be particularly helpful in longer or thicker coated breeds. Though numerous wives’ tales exist about the best method for removing ticks, grabbing a tick’s head with a pair of tweezers and gently pulling until they are unattached is an easy and effective method. Making sure all parts of the tick have been removed is crucial. After removal, it is a good idea to wash the attachment site with soap and water to avoid secondary bacterial infections.

Clinical signs in dogs that have contracted disease from ticks are non-specific, but tend to be relatively similar regardless of the underlying infectious cause. Fever, general malaise, skin rashes, anorexia, stiff or painful joints, anemia, and occasionally neurological problems are all common signs of tick borne diseases. Unfortunately, none of these clinical signs are specific for any particular disease. Therefore, your veterinarian may need to perform some significant testing in order to obtain a diagnosis. It is important to try and start treatment (often antibiotic therapy) for these diseases as early as possible, as a favorable outcome is much more likely when started early.

As with many diseases, prevention is the best medicine when it comes to parasites. There are a variety of tick collars and other preventative medications (some of which also kill fleas) that can be used to prevent disease transmission from ticks. Your veterinarian is a great resource to design a tick prevention protocol for your individual dog based upon regional tick populations and lifestyle risk factors that might make your dog more likely to be at risk for tick borne illness.

Core Conditioning for Your Dog