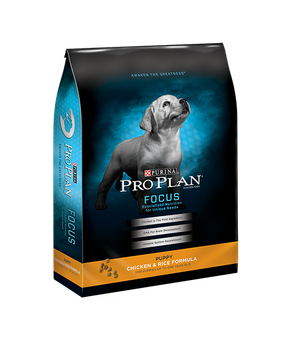 Puppy-formula foods have been around for a long time. Theories, myths, personal beliefs and veterinarian recommendations concerning them began to form about 31 seconds after they hit store shelves. This mass of information and misinformation can make it confusing for a puppy owner to know what to feed and when to switch a puppy to an adult formula.

When my dogs were young, a popular theory was to switch a dog off of a puppy formula at around six months of age. It was believed that puppy formulas were too hot and caused bones to develop too fast. I switched both dogs, the lazy bulldog and active Labrador, to performance formulas at about that age. Both developed well and with no issues. But was it the right thing to do and does the advice still apply?

It turns out that a ton of research and changes have taken place around puppy formulas in the last 10 to 15 years, and that’s always good news – for knowledge, whether it proves or disproves your position, is a means to a better end.

“The myth of switching a puppy to adult food early persists to this day. It started at a time when research on hip dysplasia and bone malformation was being done and finding the proper calcium-to-phosphorous ratios. A lot of it revolved around research in great Danes and Labradors,” said Brian Zanghi, a nutritional research scientist with Purina. “The thing is, the calcium/phosphorous ratio has been addressed.”

With scientists finding the proper calcium-to-phosphorous ratio, and taking into account protein levels, puppy growth rates and other variables, puppy-formula foods have become better – safer – for developing dogs, which means you don’t need to make the switch to adult formulas prematurely.

“It’s best to have a puppy on a puppy formula past one year of age,” said Zanghi. “Add to that the fact that puppy formulas often have other nutritional attributes that benefits them, such as colostrum, which can have a significant impact on reducing intestinal stress, diarrhea and enhanced immune function, or higher levels of DHA, which aids in vision and brain development. If you take those out of the equation too, then that puppy is missing some things.”

Of greater concern, much like in humans and adult dogs, is the amount of food a puppy consumes.

“It doesn’t matter which food – adult or puppy formula – a puppy is on, if it’s fed too much, and receives too many calories, it’s going to cause an accelerated muscle development related to bone development. It all needs to be in proportion and the puppy should maintain an ideal body score,” said Zanghi. “An overweight puppy is often a driver of later health issues.”

Paw Print Pedigrees: All About the Dog Page

My Dog is Better at Computers Than I Am. How Do I Place an Order at Paw Print Genetics?