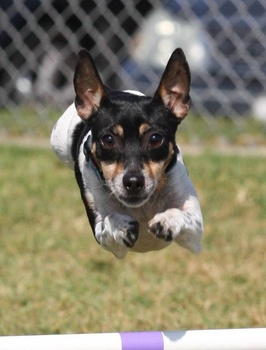 In October of last year, we told you the story of Rickie Roo, the amazing agility dog, service dog and a roving reporter for the United States Dog Agility Association. She is well known in the sport of agility and in the rat terrier community.

Lens luxation can happen suddenly and when it occurs, needs to be surgically corrected as soon as possible to try to minimize any loss of sight. Luckily, Rickie Roo's luxated lens was caught very early by her owner,Deborah Davidson Harpur. Thanks to early intervention, Rickie Roo had an 85 percent chance of vision in that eye after surgery. At the time of her surgery, her veterinarian, Dr. Christin Fahrer, DVM, MS, DACVO believed that Roo could probably still do agility, but her depth perception would be significantly impaired and would not be as it was before the injury occurred.

PLL is characterized by the dislocation of the lens in the eye thought to be due to the breakage of the ligaments or zonules that hold the lens in its normal place. Affected dogs may present with sudden signs of irritation in the eye with excessive twitching, blinking and tearing of the eye. Cataracts and inflammation of the eye are also associated. Dislocation of the lens can occur in both the forward and backward position within the eye, but dislocation in the forward position is more common and serious. If not treated immediately, lens dislocation can lead to glaucoma (increased pressure in the eye) and vision loss.

Rickie Roo was bred and born before the mutation in the ADAMTS17 gene was identified and a test was developed.  After she was born, her breeder tested her breeding stock and contacted anyone who might either have purchased an affected dog or one that carries the mutated gene. Genetic testing of the ADAMTS17 gene will reliably determine whether a dog is a genetic carrier of PLL. PLL is inherited in an autosomal recessive manner in dogs. In most cases, carriers of the mutation do not show symptoms of the disease. However, in rare instances, some carrier dogs have been reported to have PLL. Therefore, all dogs that tested as affected or at-risk (two copies of the mutation) or carriers (one copy of the mutation and one copy of the normal gene) should be periodically checked by a veterinary ophthalmologist for signs of luxation. In addition, you should watch for sudden changes in behavior and any squinting, excessive blinking or pawing at the eye, which may indicate a sudden lens problem that will need immediate attention. Surgery can be costly, estimated around $4,300 to remove the damaged lens.

Roo was genetically tested for PLL and found to be at-risk a few years ago, so her owner knew that the condition was always a possibility. However, being at-risk for PLL does not guarantee your dog will develop a lens luxation. Roo had an unrelated eye injury before the DART 4 star event a few years back and at that time Roo and her owner met with Dr. Fahrer of Eye Care for Animals who they have been seeing ever since. Dr. Fahrer comes highly recommended by Roo’s owner and reportedly is very direct, practical and understanding about your dog’s eye concerns.

Roo recuperated at home and tolerated her treatment with eye drops well. However, her future in the agility ring was unclear.  To make matters worse, approximately two weeks after Roo's left eye lens required surgical removal due to luxation, her right lens also dislocated and required immediate surgery.

Well, Rickie Roo is a very determined little dog! We are happy to report that nine months after her ordeal, she is fully recovered and back in the agility ring – and so happy to be back! Her owner, Deborah, told me that knowing about PLL helped her know what was happening when she saw it and she was able to get prompt appropriate care for Rickie Roo. Knowing that her dog was at risk after DNA testing saved Roo’s vision and possibly her eyes.

To know if your dog may be at-risk for sudden lens luxation and to make sure your dog has a happy ending, you can have your dog’s DNA examined for the mutation in the ADAMTS17 gene.  Paw Print Genetics offers PLL testing and would welcome the opportunity to discuss your dog’s genetic health with you.  We know that having healthy, happy dogs is your primary objective and we are here to help.

Why is my dog so itchy? Part 3: Lice and Mites