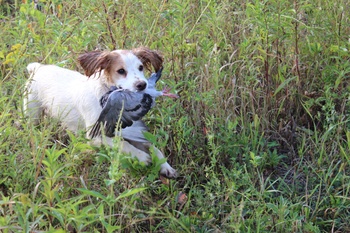 Popular in both the U.S. and England, the cocker spaniel was originally bred as a gun dog that pushed game to hunters in the field. Originally, there were only two types of spaniels – those that hunted primarily on land and those that took to the water to retrieve game. Through time, those two classifications became more and more varied as specific breeds were developed. The cocker spaniel was used more on land (its name is derived from aptitude for woodcock hunting) and is among the oldest of gun-dog breeds – with its heritage dating to the first spaniels that came out of Spain more than 500 years ago.

As the happy-go-lucky cocker spaniel became more popular, and with the rise in conformation competition after 1885, a split took place in the breed – those dogs used for the field and those who competed in the ring. Most noticeably, field-bred cockers have a shorter coat and ears than conformation dogs, as well as a higher prey drive.

The cocker’s popularity soared in both realms, as well as in the pet world. In the show ring, the cocker has been the most successful breed at Crufts, winning Best in Show seven times since 1928. In the gun-dog world, cockers have served as the foundation stock for several breeds, including the field spaniel and the American cocker spaniel. The American cocker was originally a gun dog, but the breed was so popular that conformation lines have overwhelmed the stock; the result being that if you want a cocker spaniel with proficiency in the field, you just about have to select one from English lines.

English cockers are a medium-sized dog (ranging between 26 to 24 pounds); larger than American cockers but smaller than the closely related springer spaniels. They come in various colors, shades and markings. According to the AKC, “parti-colors are either clearly marked, ticked or roaned, the white appearing in combination with black, liver or shades of red. In parti-colors it is preferable that solid markings be broken on the body and more or less evenly distributed; absence of body markings is acceptable. Solid colors are black, liver or shades of red… tan markings, clearly defined and of rich shade, may appear in conjunction with black, livers and parti-color combinations of those colors.”

Intelligent, hard-working, loyal, athletic and always tail-wagging happy, cockers rank 18th in Stanley Coren's The Intelligence of Dogs, scoring excellently in working/obedience intelligence. While happy and friendly, cockers can be dominant and, rarely, aggressive towards strangers, other dogs and even their owners/family members. Like springer spaniels, cockers can sometimes suffer from “rage syndrome” – when a dog will suddenly attack without warning or provocation. It’s a rare circumstance, but one that has been documented studied in the breed – something to keep in mind if you plan to have them around children.

To celebrate the English cocker spaniel, if you order the breed’s five-test panel screening by Nov. 10, 2013, you will receive 15-percent off your order by using the code “FBECS” at checkout.

The Chronic Disease That is Killing Our Dogs