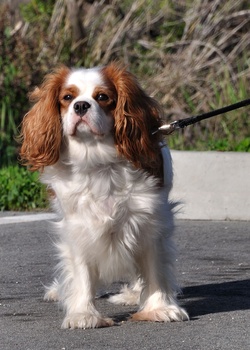 The Cavalier King Charles spaniel, a toy breed best suited as a companion pet, has a very interesting history that perfectly – one that exemplifies how humans have manipulated canine genes through selective breeding.

The ancestry of toy spaniels, from which the Cavalier and closely related King Charles spaniel descend, can be traced to the Far East (likely Japan, which suggests a common ancestry with the Pekingese). It’s believed that these toy spaniels were given to European royalty as gifts.

History shows that the earliest recorded appearance of a toy spaniel in England was in a painting of Queen Mary I and King Philip in the early 1500s. However, it was during the reign of King Charles II (1649-1685) that the small spaniel breeds exploded in popularity – and from when they were first identified with the monarchy by name. So enamored with them was Charles, that the dogs reported had complete freedom within Whitehall Palace – and that Charles had a tendency to pay more mind to the dogs than visitors and state business.

The toy spaniels of Charles’ day were said to possess a flatter skull and short noses, which is the biggest distinction between the two breeds that are adorned with his majesty’s name today.

In the early 19th Century we witness the perfect example of manipulation of canine genes to suit human desires. As dogs with brachycephalic skulls became popular, the toy spaniels that had served as companion animals and occasional hunters for 200 years were crossed with domed-headed, short-nosed dogs such as the pug. The result was a long-haired spaniel with a much shorter nose and rounder skull – which all but eliminated the small amount of hunting the preceding spaniel took part in. The name King Charles spaniel was eventually attached to the dogs and continues to identify the breed with these characteristics to this day.

The interesting thing about the Cavalier King Charles spaniel is that it didn’t just develop with the single genetic shift. Instead, it went through an evolutionary split from the King Charles spaniel starting in 1926 when an American, Roswell Eldridge, offered a prize to the best male and female dogs that most resembled the actual spaniels from the breed’s heyday – “old type, shown in pictures of Charles II of England's time, long face, no stop, flat skull, not inclined to be domed, with spot in centre of skull.”

This split from the King Charles spaniel, the third tier in the Cavalier evolution, gives us the present-day breed that differs from its predecessor not only in skull shape and ear set, but also height and weight – the Cavalier is a slightly larger dog by a couple of inches and pounds. Other than that, both dogs have four distinct colors: Blenheim (chestnut on white), black and tan (known as King Charles coloring), ruby (dark, rich red) and tricolor (black and white with tan markings).

While active and playful, Cavaliers no longer retain much hunting instinct, but instead excel as companion and family animals. Eager to please and affectionate, they get along well with other animals and children; making them great for families and households with multiple pets, as well as therapy dogs.

Cavaliers have several serious medical issues that potential owners should understand – from heart issues to brain and spine problems to blood disorders to eye and ear problems to hip dysplasia.

One of the most serious conditions is mitral valve disease, a heart condition that nearly all Cavaliers are susceptible to – and it’s the leading cause of death in the breed.

How prevalent is Neuronal Ceroid Lipofuscinosis in the dog?